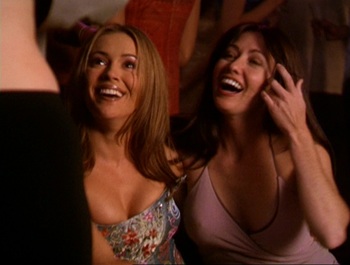 Blinded By The Whitelighter

The Charmed Ones battle their most powerful opponent, an ancient warlock who threatens the existence of all Whitelighters.

Piper and Prue prepare a potion for Phoebe to use on Inspector Reece Davidson, who is investigating Cole's disappearance. One of the ingredients is bat guano; the odor fills the kitchen. The potion will strangle Davidson from the inside if he's a demon. Leo has been out late helping charges, and Piper isn't happy that he can't talk about it.

A warlock, Eames, pursues a witch, Vivian, through an alley. He throws a fireball at her, and she deflects it into a crate. Eames throws another fireball, and Vivian deflects it, seemingly vanquishing him. Just as Vivian is sighing in relief, the original Eames blinks in from behind; it turns out Vivian only vanquished a clone. He kills her with an athame and takes her powers. Her Whitelighter, Natalie, orbs in too late, but gets a good look at Eames.

Piper is trying to get Leo to talk more about what he's doing, but Leo isn't willing to take any chances while they're on probation. Just as they kiss, Natalie orbs into the manor, holding the athame Eames used to kill Vivian. Prue walks in. Seeing the athame, she thinks Natalie is a demon and is about to leap over the table to attack her. However, Leo assures her that's unnecessary. Natalie and Leo have known each other for some time; she was a medic in Leo's unit during World War II and they became Whitelighters around the same time. Natalie is here to warn the sisters that a warlock killed Vivian and took her powers; Vivian was her most powerful charge and ignored her advice to lay low. Natalie is a stickler for the rules, and is also scandalized over the "special attention" that Leo gives to the sisters, especially Piper. They argue about Piper in their special Whitelighter clicking language. Prue goes to identify the warlock in the Book of Shadows, but Natalie doesn't like that they keep the Book in the attic. According to the rules, they're supposed to keep it in a specially protected altar room. Leo tries to grab a strawberry, but puts it back after Natalie disapprovingly clicks at him; Whitelighters aren't allowed to eat on the job.

Meanwhile, at a diner with Davidson, Phoebe spikes his coffee with the potion. He coughs a bit, but it turns out to be allergies. He points out the numerous occult items in Cole's apartment, and tells Phoebe that Cole has a dark side. Phoebe feigns ignorance.

Prue, Piper, Leo and Natalie find the Book's entry on deflection. Prue and Piper can't understand how a warlock could get that close to Vivian, especially since she's almost as powerful as they are. Natalie and Leo figure out almost at the same time that it could have been a warlock who can clone himself. Prue telekinetically leafs through the Book's pages and lands on Eames' page. He killed a witch in 1989 and took her ability of shapeshifting. Two years later, he killed another witch and took her cloning power. Prue realizes Eames is planning something big, but can't figure out what it is. Natalie tries to shoo Prue and Piper out of the room so she and Leo can talk in private. Piper will have none of it, and freezes Natalie, much to Prue's delight. She thinks Natalie is trying to muscle in on them, even though they already have a Whitelighter. Leo, however, thinks Natalie is merely being cautious because she lost a charge. He talks Piper into unfreezing Natalie and they head for the kitchen. Piper tells Leo that she isn't jealous, but doesn't like that Natalie knows things aboaut him that she doesn't. Phoebe comes in, and Leo tells her about Natalie.

Prue scries for Eames. Natalie doesn't think it's possible to scry for a warlock, but Prue is focusing her crystal on Vivian's power, which is technically still alive. She finds Eames in the Industrial District just as Phoebe walks in. Prue calls for Piper and Leo. Phoebe has a vision of Eames apparently killing a male witch. Natalie wants to consult the Elders before attacking Eames. She thinks he might be taking a run at the sisters; as their powers would be an incomparable prize for any warlock. Natalie suggests that they consult the Elders before making a move. Prue seems to agree, but it's only to shut Natalie up. Natalie orbs away.

The sisters and Leo find Eames chanting in an alley. Piper tries to freeze him, but Eames deflects it and disappears; it was really a clone. The "witch" appears, but he's actually a Darklighter. Recognizing Leo as a Whitelighter, he conjures his crossbow and shoots, but Leo orbs out. Phoebe kicks the Darklighter down and Piper freezes him. Before they can vanquish him, the real Eames appears. He sends the Darklighter up in flames and takes his crossbow.

The sisters and Leo can't figure out why a warlock would want to kill a Darklighter. They also can't figure out why Eames didn't even try to fight them. Natalie orbs back in, and isn't happy that the sisters went after Eames without advice from the Elders. She thinks the sisters are being far too reckless, especially considering they have a higher calling than most other witches. The Elders call Natalie and Leo and they orb out holding hands, much to Piper's frustration. The sisters try to get a fix on what Eames is planning.

In the Heavens, Natalie isn't happy that Leo hasn't put on his Whitelighter robe, but Leo says he's more comfortable in his jeans. Natalie is concerned about the sisters, but Leo tells her their impulsive nature is what makes them so great. Natalie, however, thinks Leo's closeness to the sisters, especially with Piper, is clouding his judgment. For instance, she doesn't think they should have ever allowed Belthazor to get as close to them as he did. She then admits she has another agenda; to tell the Elders whether she thinks his love for Piper is getting in the way of his duties. Just then, Phoebe calls for Leo, and he orbs back down.

Phoebe confesses to Leo that Cole is alive. She said she had every intention of vanquishing him, but couldn't bring herself to throw the potion. She assures him that Cole is good and is no longer a threat to them. Leo is upset, and thinks his guidance may have led Phoebe to let Cole go. As Leo walks away, he feels the pain of a witch being tortured. The witch is not his charge, but he wants to go to her. Prue, however, suspects a trap; Eames wanted a Darklighter's crossbow so he could kill a Whitelighter. Natalie orbs in and agrees with Prue; she thinks Eames wants to orb to the Heavens and massacre the Whitelighters. Phoebe realizes what this means— without Whitelighters to protect them, Eames would be free to massacre all witches as well. Natalie says the Elders have recalled all Whitelighters except for Leo and her. Eames at last kills the witch because he realizes he has no use for her.

The sisters aren't happy that Natalie didn't let them save the witch. They also think vanquishing Eames will be difficult due to the numerous powers he now has. They come back to the living room, where Leo tells them he believes his feelings for them are clouding his responsibility to guide them. He has asked Natalie to temporarily take his place as their Whitelighter, and wants them to do as she asks until he returns.

Natalie trains the sisters in a strict military style. They are to attack Eames and take the crossbow, and vanquish him only if they get the chance. The sisters offer up numerous ideas for how they want to get the crossbow, but Natalie shoots them all down. Natalie is determined to rein in the sisters' impulsive nature. Afterward, the sisters prepare a spell. They have to run it by Natalie, much to their frustration. However, to their surprise, Natalie approves. Prue wants to scry for him, but Natalie plans to use herself as bait and draw Eames out where the sisters can ambush him and take his crossbow. She thinks that by drawing Eames to their turf, they'll have the advantage. Piper doesn't like this idea; if Eames kills Natalie, he can take her powers, opening the door for his long-planned rampage in the Heavens. Natalie, however, is certain their plan will work.

Natalie orbs to the slain witch. Eames blinks in and shoots at her, but Natalie orbs away. Prue flings the crossbow from Eames's hands and he shimmers out, a clone. The sisters take the crossbow and head back to the manor, but think this was too easy; Eames didn't even try to fight them. Natalie is initially overjoyed that they got the crossbow, but starts to get as suspicious as the sisters while she's holding it. The crossbow morphs into the real Eames, who grabs Natalie. Prue tries to fling him away, but Eames deflects it and sends her flying over the couch. Piper tries to freeze him, but Eames deflects it and flings her over the couch as well. Before Phoebe can react, Eames stabs Natalie with an arrow and blinks away.

The sisters are disgusted at what happened; they feel if they'd just operated like they usually did Natalie would still be alive. They call for Leo, who has been watching. He thinks they have only one chance to stop him, but it entails breaking a lot of rules. The sisters realize what this means—going to the Heavens.

Eames glowers over Natalie while she writhes in agony from the poison. Finally, he jams the arrow all the way into her, killing her. Eames takes Natalie's powers and orbs to the Heavens. He spots two Whitelighters and shoots an arrow at them, but one of them deflects it away. The arrow freezes in midair. The "Whitelighters" reveal themselves to be Prue and Piper. Before Eames can figure out what is happening, another "Whitelighter" rushes in from behind and kicks him into the arrow. The third "Whitelighter" turns out to be Phoebe. Although Eames is mortally wounded, the sisters think the poison isn't working fast enough. They vanquish Eames with the spell they wrote earlier. Leo joins them and tells them they have to leave before the Elders find out.

The Box plays at P3. Leo has been gone a long time and Piper worries that the Elders are angry with him. Leo joins the sisters, though, and tells them that the Elders have lifted his probation and he can be officially engaged to Piper.