Phoebe turns to Cole for help when Prue is tricked by a demon into marriage so he can turn the sisters evil and steal the Book of Shadows. 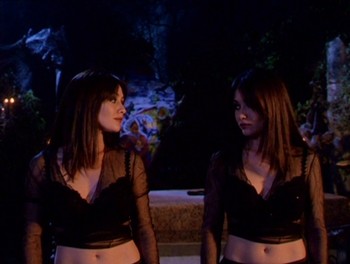 Phoebe is watching the end of her favourite movie, Kill It Before It Dies. Cole appears in the movie, having learned this trick from the Demon of Illusion, and tells Phoebe he's returned for good.

Prue leaves P3 with Justin and they agree to lunch at 1:00 the next day, though Prue thinks Justin is rather boring. The warlock Zile skulks nearby. Inside, Piper is discussing her wedding plans with Leo; he wants a much simpler wedding than she does. They are to meet the wedding planners the next day. When Piper leaves, Zile assumes her form and asks Prue for some lipstick. He then resumes his true form and blinks back to his lair.

In his lair, Zile meets with the dark priestess, Dantalian, and hands over the lipstick. She mentions that a fringe benefit of marrying Prue will be getting the Book of Shadows. Due to their Power of Three bond, if one Charmed One turns evil the other two will turn evil as well, and the evil will flow to the Book. She prepares a potion and applies it to Zile's lips. The potion is designed to paralyze Prue so she won't be able to fight them when Zile gets them to his lair.

The wedding planners come to the manor. Leo tries to drop hints and make them go away. Piper plans to have maybe 60 guests, a number that Leo isn't too happy with. When the planners ask about hors d'oeuvre, Leo suggests pigs in a blanket. Leo wants to get rid of the wedding planners, but Piper wants to make sure everything is all right in case she has to fight a demon on her wedding day. Prue gets a call telling her that Justin's car has broken down and asking her to meet him at the restaurant. Prue asks Piper to return her lipstick and Piper doesn't know what she's talking about.

Phoebe goes to the mausoleum, finds Cole there, and punches him. She says she should have vanquished him the first time. Cole tells Phoebe that he is on the run, hiding from the Source of All Evil. He wants to get back together and renounce evil for her love, but Phoebe is unwilling.

Zile assumes Justin's form and meets Prue at the restaurant. The real Justin appears at the manor, looking for Prue. Phoebe and Piper suspect a shapeshifting warlock and call Prue, who doesn't answer her cell. "Justin" offers to repeat the kiss from last night and the two find themselves in Zile's lair; Prue is unable to move. Phoebe scries for Prue to no avail, and Leo reports that neither he nor the Elders can sense her either. Leo says that he knows Prue is still alive; the Elders would be able to sense her death. He also says the Elders agree that a shapeshifting warlock is involved— one who somehow wants all the Charmed Ones' powers.

Zile and Dantalian lay Prue out on an altar. Dantalian casts a spell over Prue to tie her both to Zile and to evil. Dantalian kisses Zile, who immediately starts feeling groggy, unknown to him Dantalian had taken the potion she'd used to trap Prue and applied it to her own lips. As Zile slips into unconsciousness, Dantalian reveals that all she really wanted was to get the Book. Once the Book turned evil, Dantalian planned to steal it and take its power for herself.

Phoebe again meets Cole at the mausoleum and asks for his help. Cole says that warlocks don't have the power to cloak themselves from good; he thinks whoever took Prue is working with an upper-level dark dignitary who does have that power. He suggests that these beings are after the Book. Cole agrees to help Phoebe and she briefly but passionately kisses him.

Piper is flipping through the Book and finds that it has evil spells in it now, much to both her and Leo's surprise. Without warning, Piper disappears and reappears in the kitchen. An alarmed Leo tells her that she just blinked warlock-style. Phoebe has returned and finds that she can blink, too. Leo quickly realizes that whoever took Prue has somehow turned her evil and the evil has flowed to Piper, Phoebe and the Book as well. Piper and Phoebe quickly embrace their evil powers and their personalities begin to noticeably darken, further worrying Leo.

The wedding planners ring the bell and Piper answers. The man starts to talk about the dinner menu when Piper demands pigs in blankets. They think Piper is joking, but Piper lets it be known she's serious. She waves her hands and the man turns into an actual pig in an actual blanket. As the woman looks on in shock, Piper waves her hands again and encases her in ice. Leo tries to talk some sense into them, but Piper calls Leo a stick in the mud. Phoebe waves her hand, turning Leo into a long pole stuck in a bucket of mud.

Piper and Phoebe conclude that if Leo is right and Prue has turned evil as well, their evil potential will be astronomical if they can free Prue and reunite the Power of Three. Piper turns the wedding planners back to normal. Before they can figure out what is happening, Piper fires them and Phoebe violently blows them out the door. Piper turns Leo back, and Leo tries to get them to resist the evil. They refuse and the Elders call him away, for they will not send a Whitelighter to support evil. Piper and Phoebe revel in their growing evil, and want to free Prue so they can wreak real havoc.

Cole appears in Phoebe's room. He tells her that he ran into a demon while doing recon work, but had to turn into Belthazor and kill him. Although he isn't proud of it, it greatly pleases Phoebe and makes her come on to him. Cole warns Phoebe that Prue has been forced to marry a warlock, and that Dantalian has performed the ceremony that will turn her and her sisters evil. He sincerely wants to turn good, and is unwilling to have Phoebe as evil. Phoebe still thinks something can happen between them, but Cole tells her that evil beings can't feel real love— only lust and gratification. Phoebe kicks Cole several times, enraging him and provoking him to turn into Belthazor. Belthazor warns Phoebe that Dantalian is after the Book before shimmering out.

Dantalian fades into the attic and takes hold of the Book. Just as she's about to leave, Piper distracts her while Phoebe high-kicks her. Phoebe points a knife and the two demand to know where Prue is. When Dantalian won't talk, Piper freezes her hand. Dantalian continues to stall, and Piper shatters her hand with a candlestick. Leo orbs in, distracting Piper and Phoebe long enough to allow Dantalian to escape with the Book. Piper wordlessly freezes Leo and then Phoebe smashes him.

Phoebe wants to slaughter some innocents, but Piper is more worried about finding Prue in case Dantalian wants to kill her. Phoebe realizes that since she and Piper are now warlocks, they can use their blinking power to find Prue. Piper is skeptical; they don't know where Prue is. However, Phoebe points out that blinking works similar to orbing for Whitelighters, which means they don't have to know where Prue is, but can simply focus on her to find her.

Dantalian is reading a spell to kill Prue in revenge for how Piper and Phoebe tortured her. Just then, Phoebe and Piper blink in. Dantalian awakens Prue and Zile. Piper and Phoebe beg Prue to come with them. However, Prue curtly tells them she isn't their sister. Prue raises her hands, sending Piper and Phoebe flying into the wall. Just as Piper is about to get Prue a "divorce" by freezing Zile, he shapeshifts, assuming Prue's form. The two both blink so they have Piper and Phoebe surrounded. Piper and Phoebe can't tell which is the real Prue. Prue tells Zile that she loves him, and Zile replies, "You too." Phoebe remembers that Cole told her evil can't love. Dantalian conjures giant daggers into Prue and Zile's hands, and they go in on Piper and Phoebe. Phoebe urges Piper to freeze Zile. Piper obliges, and then shatters him. Zile's death breaks Prue's ties to evil, and restores Piper and Phoebe to good as well. Dantalian tries to escape, but Piper freezes her. The Book of Shadows is back to normal; the sisters read a spell and vanquish Dantalian.

Piper cries over the shattered bits of Leo, but Leo orbs in behind her alive and well. He tells them that their vanquish of Zile undid any evil they may have done. Phoebe apologizes for shattering Leo, but Leo says that he knew it wasn't really them. Prue thinks that in a sense, it was them; she could feel the evil. She doesn't think Dantalian planted evil in them, but merely tapped into something that had always been there. Leo says one must choose to be evil. Phoebe admits it was fun to be evil for awhile, but doesn't plan on tapping into her dark side again any time soon. Piper agrees to a small wedding, and Prue decides not to see Justin anymore because he is "way too boring". Phoebe meets Cole at the mausoleum and reports that all is normal again. Phoebe still doesn't want Cole back; she feels the pull toward her dark side would be too strong if they tried to make it work. She does admit, though, that she will always love him.