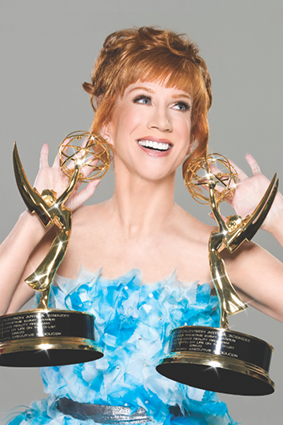 With her two babies, Emmy and Emily
Advertisement:

Kathleen Mary "Kathy" Griffin (born November 4, 1960 in Oak Park, Illinois) is an American stand-up comic, actress, and televison host known for her crass, storytelling-like humour that focuses on celebrities and her self-appointed status as a D-list celebrity.

At the beginning of her career, Griffin landed small roles in movies and regularly performed on the comedy circuit. Her big break was on the TV show Suddenly Susan, where she played the sassy restaurant critic Vicki. This, however, was not enough to make her a household name, and after the finale of the series she reverted back to semi-obscurity, landing small roles in TV and film.

In 2003, Kathy participated in and won the third season of The Mole, Celebrity Edition. She claims this was the moment in which she officially became a D-list celebrity (meaning she felt she was just barely one) and in 2004, she officially claimed the title by naming her third comedy special The D-List. This comedy special was popular enough to lead to her Emmy award-winning reality show My Life on the D-List that followed her attempts to gain stardom in Hollywood, which lasted six years. She would go on to host her own talk show, called Kathy, for two seasons and hosted E!'s Fashion Police after the passing of Joan Rivers.

She had co-hosted CNN's New Year's Eve coverage from 2007 to 2017 with best friend and frequent humiliation target Anderson Cooper (why he agreed to do it with her every year is a mystery to everyone, up to and including Cooper himself). Every successive broadcast required her to go to even further lengths to kill him with embarrassment; despite (among other antics) spray-tanning his face with no warning, painting stripes in his hair, and getting her kit (mostly) off on live TV. Repeatedly. Though its ratings were far lower than that of the famous "New Year's Rockin' Eve", it did have a loyal fanbase. She was fired from the show in May 2017 after she released a graphic publicity photo that depicted her holding the decapitated head of Donald Trump.

Griffin's comedy is mainly based on celebrities, whether it's ones she comes into contact with in real life or ones she sees on TV. While this has gained her some admirers, many celebrities actively avoid her (such as her former Suddenly Susan co-star Brooke Shields). She's also an outspoken LGBT activist, and fought the anti-gay marriage Prop 8, and in recent stand-ups has read hate mail she receives from people opposed to gay rights.

Griffin currently holds the world record for the most comedy specials by a stand-up comedian in history, with (as of 2015) 20 comedy specials aired. She's also a Grammy winner, and is known for her shameless attempts to get nominations for awards shows, such as the previously mentioned Grammys (with her album "For your Consideration"), the Tonys (with her one-week Broadway show Kathy Griffin Wants a Tony, and even an attempt to align herself with Oprah Winfrey's book club with her autobiography Official Book Club Selection.

She also hosted The Roast of Joan Rivers on Comedy Central. Oh... and she has a blink and you'll miss it moment in Pulp Fiction; the scene where Bruce Willis tries to run down Ving Rhames (in the credits she's listed As Herself).

Some of her TV works include: