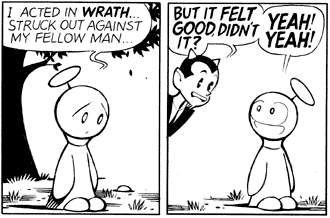 No one understands Evil Is Cool better than the hero with a Superpowered Evil Side. Once their inner Hyde is unleashed, they become nearly invincible, all but immune to pain, and stronger and more powerful than all the Applied Phlebotinum and Training from Hell in the world could make them. Is it any wonder they get Drunk on the Dark Side?

But the effect on their body is just a fringe benefit to the effect on their mind. Their conscience just shuts up. They're free to break all the rules, do anything they want. No more scruples, no morals, no inhibitors to hold them back from tearing their arch enemy to shreds. And it feels good.

Often a motivation for For the Evulz, although For the Evulz doesn't have to involve the character even enjoying the evil they do — they just do it because it's evil.

For many a hero with a Split Personality, that's the scariest thing about their Unstoppable Rage or Enemy Within — realizing that, deep down, they like it...

The reason people take Psycho Serum. Cue This Is Your Brain on Evil. Because being bad felt so good, this often leads villains into Reminiscing About Your Victims. When it can be acted out within a video game, this is Video Game Cruelty Potential. Counterpart to Good Feels Good. Usually pit against Being Good Sucks. May have a horrible hangover when Being Evil Sucks. This can also overlap with Card-Carrying Villain and is one of the defining traits of a sociopath.

Compare Fame Through Infamy when evil feels good because of the "fame" it brings.