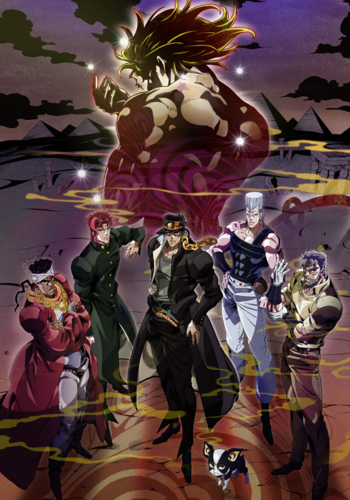 "Look, no one ever said Jotaro Kujo was a nice guy."
"This world is full of Stands that surpass even your wildest imaginings! Those loyal to DIO will follow you at every turn!"
— Gray Fly
Advertisement:

Stardust Crusaders (スターダストクルセイダース) is Part 3 of the long-running manga series JoJo's Bizarre Adventure. It is preceded by Battle Tendency and followed by Diamond is Unbreakable.

In 1983, three fishermen pull a large chest out from the middle of the ocean believing they have struck the jackpot. Strangely, the chest is locked from the inside, but they manage to get it open. Sometime later, their boat is discovered, drifting with no one on board and no signs of struggle, with all that remains being the opened chest marked with the name "DIO"...

Set in 1988-89 (1989 was the same year this part began publishing, running until 1992), Stardust Crusaders stars Jotaro Kujo, a self-proclaimed delinquent who thinks he is possessed by an evil spirit. In fear of accidentally hurting others more than he needs to, he turns himself in to the police. When Jotaro's mother, Holly, realizes that she can see this "spirit", too, she calls in her father, Joseph Joestar, to resolve the situation. With the help of Egyptian fortune teller Muhammad Avdol, the Older and Wiser Joseph manages to prove to Jotaro that what he has is a mysterious power known as a Stand, which has been awoken in the Joestar family as a result of the resurrection of Dio Brando, now known only as "DIO" (written in Latin letters for good measure), who is sending his Stand-using assassins after Jotaro and Joseph to prevent them from stopping his rise to power.

After fighting classmate Noriaki Kakyoin, who was put under DIO's thrall, the group discovers that Holly has formed her own Stand and it is slowly killing her due to her kind nature. Jotaro, Joseph, Avdol, Kakyoin, and later Frenchman Jean-Pierre Polnareff and the Stand-using dog Iggy, must head to Egypt to kill DIO once and for all to save Holly's life along with those of all the Joestar descendants who are similarly being overwhelmed by their Stands all over the world, while battling DIO's many Stand-using minions along the way.