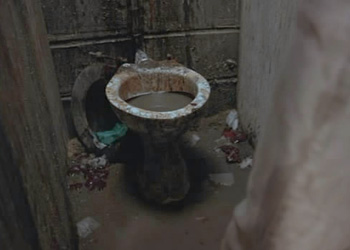 There is not enough bleach in the world to ever make this right.
"I fantasize about a massive pristine convenience. Brilliant gold taps, virginal white marble, a seat carved from ebony, a cistern full of Chanel no.5, and a flunky handing me pieces of raw silk toilet roll. But under the circumstances I'll settle for anywhere."
— Mark Renton, Trainspottingnote The toilet he gets can be seen in the page image
Advertisement:

When Potty Emergency strikes, one is forced to find a place to go, fast. Looking around, you notice a public toilet. You sigh with relief, until you open the door...

This place is littered with Bathroom Stall Graffiti, spare bits of toilet paper and paper towels, liquids and solids of undetermined origin (or rather, origins you don't want to think about), and a toilet bowl that was possibly installed discoloured, clogged and smelling. It's full of used syringes, sleeping hobos, dead hobos. The handles on the faucets and bowls may be missing. In this case, it is probably better to just go in the woods behind it.

Part of the reason this trope exists is a form of the GIFT. While clearly not on the internet; the idea that anonymity and lack of consequences/responsibility leads to complete asshattery is still demonstrated. People naturally expect privacy in the restroom, and public toilets are not cleaned by them, so they feel less guilty for trashing them, scrawling insults on the wall, or insulting their peers. And the less said about "glory holes" cut in the partition walls, the better. It is fading, but there's no better way to ensure the janitor will hate you than ruining the bathroom — see The Dreaded Toilet Duty for those unfortunate souls who have to clean these things.

This trope of course comes from Real Life, as anyone who's ever had to go at a rest stop, a park bathroom etc. can attest. Even an ill-maintained flush toilet is extremely disgusting, but pretty much any toilet without flush technologies is going to be worse (even Porta-Potties tend to be a borderline case). Outhouses and latrines were once a familiar and disgusting part of everyone's life, and while they are now rare in the industrialized world, they're still necessary in situations like wilderness camping or a Third World village; therefore, the outhouse isn't something that will ever become so obsolete that people entirely forget such a nauseating (but necessary!) phenomenon. Can be played for laughs, horror, or just plain Nausea Fuel. Contrast with Wondrous Ladies Room.

A variation is the Disgusting Public Shower - some multi-user showers such as beach, gym, and recreational/work area showers can easily rival their toilet counterparts.