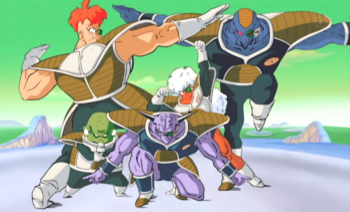 Tremble before our well-rehearsed, synchronized might!
An ensemble of Elite Mooks more developed than faceless mooks. Occasionally The Dragon or other major villain is part of The Team, and will be the official or unofficial leader. The competency of this group varies wildly.
Advertisement:

This group is typified by an overarching design theme, but also an individual quirky personality to each which may seem oddly familiar. They might act funnier than The Dragon. They mainly provide a distraction to the heroes until the real plot kicks in. The Big Bad has little qualms with killing them off if they fail consistently, possibly because their jobs often entail a bare minimum of intelligence needed. Some groups are filled with backbiting and betrayal, with the occasional Minionshipping. Occasionally, one or two of the bunch will have a change of heart, and do a Heel–Face Turn. That person is almost always a loner to the rest of the group anyway, especially if they become the Sixth Ranger.

If the heroes defeat their Dragon and their Big Bad, some or all of them may survive. They usually don't stick around in-show after that, but if they do, they may become the Terrible Trio or a bunch of Sixth Rangers.

Sometimes overlaps with Psycho Rangers, if the squad members are also each the Evil Counterpart of the main characters. See also Terrible Trio (incompetent Quirky Miniboss Squad, although they may be made a threat with Team Rocket Wins), Goldfish Poop Gang (a sillier recurring enemy that doesn't pose much of a threat), Carnival of Killers, Standard Evil Organization Squad (a larger and more serious version) and Praetorian Guard (if the Big Bad happens to be some form of royalty or official authority and they're explicitly bodyguards, albeit quirky). Contrast Co-Dragons for a situation where multiple characters split the Dragon role, but don't necessarily work together the way a Quirky Miniboss Squad would and are usually treated more seriously.

Contrast The Family for the Whole Family.