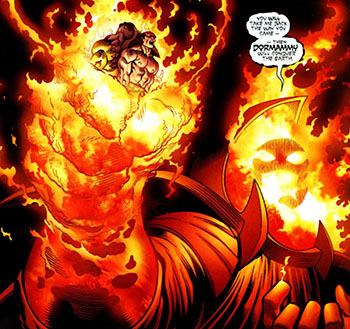 Dormammu will have you burn to cinder in chaotic flame.
"Some say the world will end in fire,
Some say in ice.
From what I've tasted of desire,
I hold with those who favor fire..."
— Robert Frost, "Fire and Ice"
Advertisement:

Fire is destructive, chaotic, and painful to touch. It has destroyed buildings, killed millions of people, scarred others, and depending on who you ask, may torture you even after death. Because of all the destruction and blood lost to it, it will often be associated with evil. Whether it's orange, red, blue, or green, it's always going to be evil. The fire doesn't even have to be your ordinary campfire, it could be the unholy fires of Fire and Brimstone Hell itself or a similarly evil variant.

This trope has many uses. Fire could be used to create the atmosphere for the Big Bad's throne room or arena. A Volcano Lair or even a big fiery place with lots of volcanoes could be the domain of the evil emperor. The villain may have control over fire, appear Wreathed in Flames, or even be (literally) hot blooded themselves. But, nonetheless, fire will be associated with evil.

Supertrope to Infernal Background and Evil Living Flames. Can occasionally overlap with Light Is Not Good since fire also produces light, and also with Fanatical Fire. Contrast with Evil Is Deathly Cold and Holy Burns Evil. For a different kind of "hot", see Evil Is Sexy, but they can overlap.