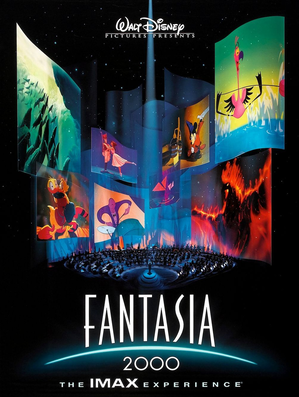 Fantasia 2000 is a 1999 American animated anthology film produced by Walt Disney Feature Animation and released by Walt Disney Pictures. It is the 38th film in the Disney Animated Canon, the first entry released after the conclusion of the Disney Renaissance (and consequently can be considered a transitory film marking the shift from The Renaissance Age of Animation to The Millennium Age of Animation), and the sequel to the 1940 film Fantasia. As with its predecessor the film consists of animated segments set to pieces of classical music, with The Sorcerer's Apprentice being the only segment that is featured in both films. The soundtrack was performed by the Chicago Symphony Orchestra with conductor James Levine. A group of celebrities introduce each segment in live-action scenes including Steve Martin, Itzhak Perlman, Bette Midler, Penn & Teller, James Earl Jones, Quincy Jones, and Angela Lansbury.

Production began in 1990, and the film featured computer generated imagery, as well as hand-drawn backgrounds in certain sequences. Peter Schickele worked with Levine on the musical arrangement of each musical piece.

Fantasia 2000 premiered at Carnegie Hall on December 17, 1999 as part of a five-city concert tour, with performances in London, Paris, Tokyo, and Pasadena, California. An exclusive release in IMAX theaters followed from January 1 to April 30, 2000, becoming the first animated feature-length film issued in the format. It had its nationwide premiere on June 16, 2000.

The sequences in this one include:

Despairing in the ark (Fantasia 2000)

Thinking that their partner was drown, Both Donald and Daisy despair over their loss of their love while they look at the amounts of couples in the ark

Despairing in the ark (Fantasia 2000)

Thinking that their partner was drown, Both Donald and Daisy despair over their loss of their love while they look at the amounts of couples in the ark