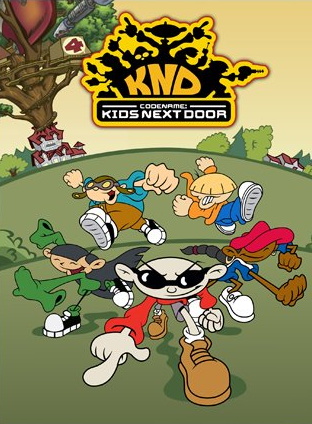 Codename: Kids Next Door (2002-2008) is an original animated series from Cartoon Network about a team of five ten-year-old 4th-graders who are members of an international organization that fights adult tyranny.

Those five kids are Sector V, a Five-Man Band in the worldwide organization known as the Kids Next Door: Numbuh One is a Properly Paranoid Conspiracy Theorist who is always seen wearing sunglasses (and has no hair); Numbuh Two is a pilot and inventor known for cracking puns at inappropriate times; Numbuh Three is The Heart of the team, constantly happy and serving as the team doctor; Numbuh Four is a Book Dumb kid who holds an invaluable amount of street smarts and serves as a combat specialist and the team's enforcer; Numbuh Five is the only sane girl trying desperately to keep the team together.

Together, the KND of Sector V fight alongside their compatriots-in-childhood against numerous villains — including The Delightful Children from Down the Lane (and their creepy father, Father), Numbuh Five's traitorous teenage sister, Cree, and the Corrupt Corporate Executive Mr. Boss — who hates children and wants them enslaved.

The show has two Licensed Games, Operation: V.I.D.E.O.G.A.M.E. for consoles and Operation SODA for the Game Boy Advance. The series also appeared in two Massive Multiplayer Crossover games: the FusionFall MMORPG, with various characters from the show serving as NPCs, and the fighting game Cartoon Network: Punch Time Explosion, with Numbuh One, Father and the Toiletnator appearing as playable characters.

started an ARG with a Rainbow Monkeys site

(revealing a database search when clicking the nose) and a video

teasing a possible sequel series, Galactic: Kids Next Door. It was revealed to essentially be an April Fool's joke after this

video was posted, but with the caveat that it appears to be the lead-in to an attempted viral campaign to get a sequel series made. A petition was made to get the series greenlit here

. This was later proposed to Cartoon Network, but executives refused due to their lack of interest.

This show now has a character sheet and its movie now has its own page: Operation: Z.E.R.O., as does its original pilot, No P in the OOL.

open/close all folders
Tropes A to D
Tropes E to H
Tropes I to L
Tropes M to P
Tropes Q to U
Tropes V to Z
end transmission.
Feedback