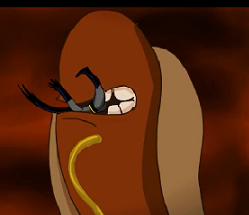 "Ah, the Leaky Cauldron. If you have the pea soup, make sure you eat it before it eats you!"
— Shrunken Head, Harry Potter and the Prisoner of Azkaban
Advertisement:

Food becomes sentient and begins fighting and killing. One can often expect it to be many times its normal size and armed with fangs and claws. This may be the result of It Came from the Fridge, Lethal Chef or Raising the Steaks, and in some cases may overlap with Anthropomorphic Food.

Not to be confused with food from Soviet Russia. Subtrope of Attack of the Killer Whatever. Compare Edible Ammunition and Edible Bludgeon (where otherwise normal weapons are made out of food products). Often an enemy found in Level Ate. Fed to Pigs is a related trope; many people eat pork, but in this case pigs eat us.

Hamburgers (non-fatally) eat one of the Miis, trapping them for a few turns.

Hamburgers (non-fatally) eat one of the Miis, trapping them for a few turns.