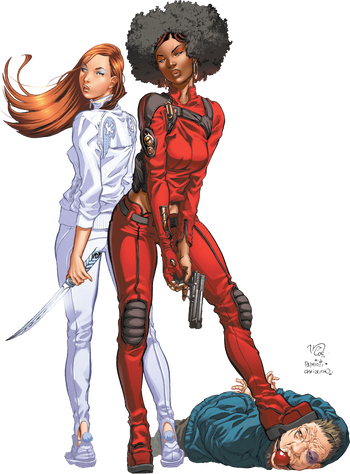 "Good evening. I'm a lizard woman from the dawn of time. And this is my wife."
— Madame Vastra (the wife in question being Jenny Flint), Doctor Who, "The Snowmen"
Advertisement:

"Well, it's kind of like James Bond. But instead of Bond, there are these two women..."

The most common Gender Flip of the Bash Brothers trope.

Female buddy-shows are rather widespread, especially in anime. This trope refers to adventure series starring two rather competent women with contrasting personalities — compare with Betty and Veronica, Red Oni, Blue Oni, Tomboy and Girly Girl, Light Feminine and Dark Feminine, and Bifauxnen and Lad-ette. They're usually not romantically involved with each other and generally are Just Friends. Subtext regarding otherwise may be present, though.

In contrast, female buddy movies are extremely rare, probably since Most Writers Are Male.

More than two Lovely Angels eventually become known as an Amazon Brigade. Everything else of the above stays the same.

Not to be confused with Angelic Beauty. Compare Strictly Professional Relationship where it's a man and a woman who work together.