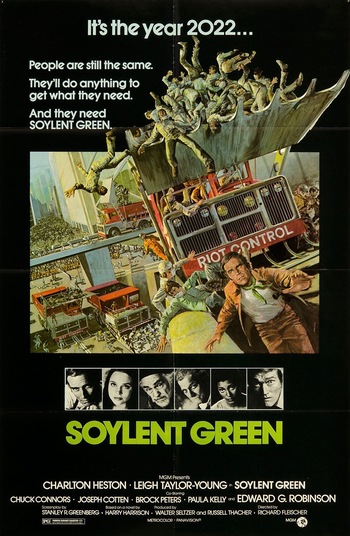 What is the secret of Soylent Green?
Do you really have to ask?
"SOYLENT GREEN IS PEOPLE!"
— Detective Thorn
Advertisement:

The year is 2022. Overpopulation has brought environmental and economic collapse. In New York City, pop. 40,000,000 (its current population is about 8 million, not much higher than in 1970), police detective Frank Thorn (Heston) is investigating the burglary-turned-murder of wealthy businessman William Simonson (Joseph Cotten), a board member of the food rations manufacturer Soylent Corporation. Based on the fact that there was valuable food and books left for him to steal, and that his bodyguard Fielding (Chuck Connors) and 'furniture' Shirl (Leigh Taylor-Young) were conveniently away at the time, Thorn believes it to be an assassination. He gives Simonson's oceanographic survey (which he himself stole) to his elderly roommate Sol Roth (Edward G. Robinson), a book collector who remembers happier times, and they have a memorable scene cooking up the food that Thorn also stole from the late Mr. Simonson.

In his investigation, Thorn discovers that Fielding has more money than his job would provide, thus placing him under suspicion. Thorn is then called off the investigation and put on riot control duty, where an attempt is made on his life. He manages to get the assassin crushed under a people-scooping bulldozer.

Roth, having uncovered a terrible secret in the oceanographic survey, has lost the will to live and decides to take government-sponsored euthanasia. Thorn finds him at the suicide clinic, just in time for Sol to tell him the secret with his dying words. He follows Sol's corpse along to a factory that processes the dead into soylent green biscuits. He makes a call to his chief, Hatcher (Brock Peters), and is unsuccessfully ambushed by Fielding who dies in the struggle. Severely wounded, he urges Hatcher to tell people the truth about Soylent Green, thus providing the famous quote.

For the trope previously known as the titular food, see Powered by a Forsaken Child, Human Resources.

Example of:
The Secret of Long Pork Pies