We Will Have Euthanasia in the Future 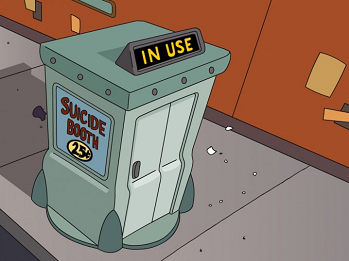 Unfortunately, there's no repeat business in the market.
Advertisement:

is at present a controversial social issue. However, in many futuristic societies, it is a norm, and may in fact be encouraged. This is generally, but not always, the sign of a Dystopia, and at the very least demonstrates the divergence between the fictional world and the actual one. A handy rule of thumb is that the consensual nature of the euthanasia presented is inversely proportional to how dystopian the society presented is supposed to be.

Note that, in some countries and US states, consensual euthanasia is legal under certain guidelines.