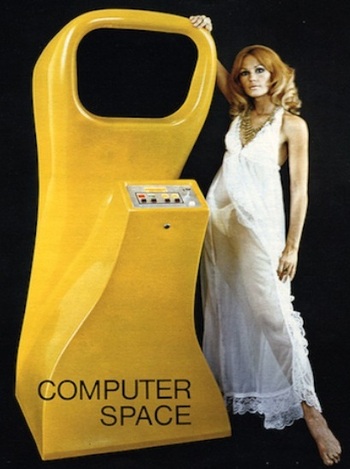 Computer Space is the first commercially sold Arcade Game, created by Nolan Bushnell and released in November 1971. It's a one or two player version of Space War. Space War had previously been software running on $20,000 general-purpose hardware; Bushnell's innovation was to use cheap logic chips to create a machine specifically for playing this one game.

Some versions were one-player against two flying saucers, others were Player Versus Player. It's a simplified version of Space War, without the planet and gravity. Your ship fires One Bullet at a Time, and you can guide it by turning your ship. In one-player versions, if you score more points than the saucers at the end of 90 seconds, you get another 90 seconds of gameplay.

Bushnell created Computer Space at home, and sold the game to Nutting and Associates, a maker of mechanical coin-op games. It was not a success, because drunks in a bar couldn't understand how to play a game designed for college students. Bushnell left Nutting and founded his own company, Syzygy Corp., later Atari.

Notably, it has a brief cameo in Soylent Green as one of the expensive toys left behind in William Simonson's lavishly equipped apartment after his murder.