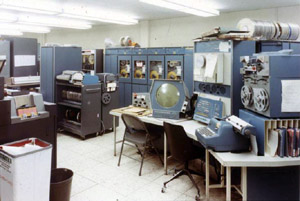 In the 1940s, 1950s, 1960s, and early 1970s, computers were room-sized or refrigerator-sized monsters that cost a fortune (as in "as much as your house and every other house on the whole street combined"). They were not very powerful or plentiful, so their time was precious. They were also the mainstay of the world of big business; before IBM loaned an air of business legitimacy to the microcomputer with the introduction of the IBM Personal Computer, and even for another decade afterward, almost all business computing was done on IBM 360 and 370 mainframes. Even today, mainframes can be still be found clanking away in corporations and government agencies, handling everything from payroll to transaction processing. During this period, the transistor and integrated circuit were invented, paving the way for further miniaturisation and increased processing power.

But around 1952, time away from Serious Business was granted. The results include, for better or worse, the first Video Games being written.

Of particular interest to gamers is Digital Equipment Corporation's Programmed Data Processor family of minicomputers. The PDPs were the first computers designed with cost as a consideration. This made them more plentiful and less critical than mainframes. The PDP-1, PDP-7, and PDP-8 (1960-65) had computing horsepower similar to the Apple ][ or the original IBM Personal Computer. The PDP-11 (1970) was closer to a 286 PC/AT or the original Apple Macintosh. The PDP-6 and PDP-10 (1963-66) were much larger and considered mainframes. All models supported video output, so they were powerful enough to play games and cheap enough for universities to buy two or three and let their students do what they wanted with them. The Playful Hacker culture starts here, as do video games. Mainframes also pioneered features like virtualization that are the cornerstone of modern IT.

Another important source of early videogaming was the PLATO network, which began in the early 1960s and peaked in the 1970s. What started as a digital learning assistant ended up as a prototype of the world-wide web with email, message boards, chat rooms, and multiplayer online games. Multi User Dungeons and online shooters start here.

In the 1980s, mainframes and minis began to be replaced by rack-mounted servers accessed by PCs and workstations over networks, as CPU architectures like the Motorola 68000, Intel 80386, and Sun Microsystems' SPARC offered similar performance to minis on desktop machines. Starting in the 2000s, these servers would be increasingly migrated to cloud computing platforms. Still, mainframes haven't gone away completely, due to their redundant, fault-tolerant designs making them indispensable for mission-critical services. Many cash registers, ATMs, bank websites, and mobile banking apps are effectively front ends to a mainframe somewhere.

Mini and mainframe computer operating systems also heavily influenced the design of modern operating systems like Microsoft Windows, macOS, and Linux, which is why the laptop you might be reading this page on has features like multitasking, virtual memory, and virtual machines.

As you'd expect, Ur Examples abound.

Appearances of these computers in media: