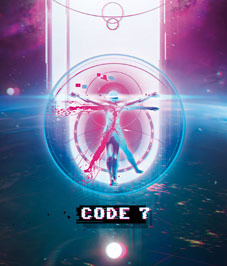 What is Code 7?
"Something is very wrong here. People are behaving strangely; maybe the stress is getting to them? But the A.I. said something that gave me the chills. It asked: Bradley, why can't I lie?"
— Bradley Lamar, Episode 0: Allocation
Advertisement:

is a hacking Text Adventure with fully-voiced dialog. It is primarily social Science Fiction, with elements of Mystery and Horror. It's developed by indie game developers Kevin Glaap and Zein Okko, under the label Goodwolf Studio

You play as the hacker Alex, who, as is admittedly not uncommon in video games, wakes up with No Memory of who they are, where they are or what the hell is going on. After you establish contact with your partner Sam, you find out that you're a part of a Search Team sent by IASA to find out why the crew at Schrödinger Station stopped responding, and bring spare parts in case their sattelites were broken. However, it soon becomes clear that what is going on here is much more than just a simple malfunction, and when a sinister AI called S.O.L.I. tries to kill you and your friend, you realize it's time to get the hell out of here, and fast! But, while you can escape the station, you cannot escape Code 7. Your mission is no longer just to fix some broken satellites; you have to Save the World.

Gather information by inspecting things, listening to logs and reading emails, chat logs and other documents. Hack into computers using Hacking Minigames based on real hacking techniques such as man-in-the-middle attack, brute-force attack or network jamming. Navigate your partners through dangerous situations, support them and gain their trust. Try to answer difficult questions such as who you really are, how much are human and AI lives worth and what makes humans human? Make the right choices... if you can. It's not nearly as simple as it seems. Indeed, nothing is; perhaps not even the reality you live in.

The game is split up into 5 episodes; episodes 0-3 are already released, and the release of Episode 4 is expected in Q3 2020. It is available for Windows, Mac and Linux, on Steam

. The developers did their best to make the game playable to everyone, so it includes an option to navigate through commands with the tab key instead of typing them out, subtitles, an option to disable the flickering to avoid potential epileptic attacks and even a mode for visually impaired players. You can watch the trailer for episodes 0 and 1 here

and the trailer for episodes 2 and 3 here

Warning: Code 7's plot is full of Plot Twists which will make you view previous events in a completely different light. Because of this, it may be best if you only proceed to each episode's examples once you have played through it. If you don't follow this warning and get spoiled, then well... sorry for the inconvenience!