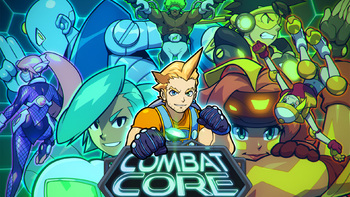 Combat Core is an upcoming game funded on Kickstarter for pc. From the official Kickstarter page:

Combat Core is a 3D arena fighting game that borrows elements from classic games like Power Stone, Custom Robo, and other fighters. The fighting mechanics focus on fast-paced combat, strategic use of your environment, and weapons in the arena. Here are the key features (more depending on stretch goals!):

Interactive Arenas with a variety of mechanics and hazards

This game seeks to be the successor to such games as Power Stone. The voice acting will be done by both mainstream voice actors and noted internet celebrities. The Kickstarter compaign goal was reached with only an hour to spare.

After three years of development it has finally coming to Steam on August 18, 2016.