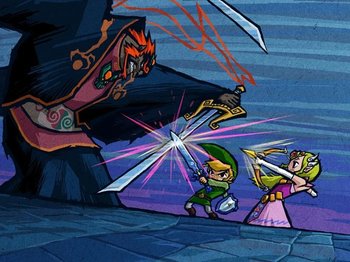 Bow and Sword, in Accord.
"Why are female soldiers always no-nonsense snipers? Says something about the writer, I think, if they perceive women as mostly poking holes in things from a very long distance away."
— Zero Punctuation on Call of Duty: Black Ops III
Advertisement:

The tendency to make a female character a ranged fighter while her male partner/teammate fights up close. In fantasy settings, she's the archer or a Squishy Wizard, and the burliest male character has a giant melee weapon. In comic books, especially Marvel Comics in the '60s and '70s, female characters are more likely to be given powers that are ranged or unconventional enough to let them stay back while their male teammates do all the up-close hitting. The most common exception to the "girls aren't melee fighters" rule comes when the female combatant is fighting someone who's equally matched.

Part of this is due to cultural taboos against showing women getting hit. Fighting from a distance is, almost by definition, safer than hand-to-hand combat, so there's inherently less chance of or opportunity for a woman getting killed if she's not actually coming to blows with someone else. It may also have to do with the fact that a skimpy costume or armor, which a lot of female characters get stuck with, looks less unbelievable on someone who isn't in melee. While Action Girls who get up close and personal with the bad guys have long since become commonplace, heroines are still more likely to have ranged powers than their male teammates.

To some extent, this reflects the physical reality that women on average have significantly

less height, muscle mass, and bone density than men, meaning they'd have a disadvantage in melee or close-range combat, or other positions where physical strength makes a large difference (e.g. modern infantry who have to haul heavy gear around for miles). In a case of Truth in Television, for exactly that reason the Soviet Red Army during World War II had divisions of female snipers, fighter pilots, machine gunners, and tank commanders, while still barring women from serving as regular infantry. However, this stops being sensible and turns into Stay in the Kitchen when a particular non-average woman meets or exceeds the physical fitness standards expected of men in close combat roles, but is denied the opportunity to do what she's good at merely because of her chromosomes. If physical standards are relaxed because of a need to replace heavy combat losses, then authorities who still cling to traditional gender roles may continue to refuse a particularly big and strong woman for front line combat even as they begin to draft men who are smaller and weaker than her.

Ironically, this trope was sometimes inverted in real life, at least with low-tech weaponry. Powerful war bows require a great deal of upper body strength to draw back, and javelins, darts, and rocks also fly farther and hit with greater force when thrown by a person with stronger muscles and longer limbs to give the projectile more velocity. Crossbows could put women on more equal footing with men because they are drawn using mechanical spanning devices or more advantageous muscle groups, but are still in part dependent on physical strength, especially in regards to rate of fire (drawing back that span was exhausting even for very physically fit men). Other possible equalizers are slings, which effectively lengthen the user's throwing arm to accelerate small stones or bullets very efficiently; and muskets, which substitute chemical propellant for muscle power, and whose effectiveness is most determined by skill and discipline. As for melee weapons, historical swords, axes, maces, etc. were rarely as heavy and cumbersome as those in fiction. In particular, anything with a slicing edge like a sword or a stabbing point like a spear could often kill with relatively little force as long as decent technique was used, especially if the target was wearing little to no armor, or the offender was good at finding weakpoints (significant physical strength was needed to smash through metal armor, as many historical archaelogy videos prove). Two-handed polearms are good options because of their reach and the mechanical advantage provided by a long shaft: Naginatas Are Feminine in Japnese culture, and a signature weapon of the Lady of War. Still, the image of the lithe, graceful female archer persists in medieval fiction.

Together, a close-range guy and a long-range girl may form a Battle Couple. The classic pairing of a caster and a basher is Sword and Sorcerer. Occasionally mutates into the Two Guys and a Girl form of Fighter, Mage, Thief. This trope could also be considered an outgrowth of Men Use Violence, Women Use Communication: Even when women do use violence, they tend to do so in a less up-front and physical manner than men do. Similarly, Male Might, Female Finesse has both parties use violence, but the woman fights with more emphasis on grace and refined skill than the man. Firearms Are Cowardly can also be related if the reason why one considers guns cowardly is because of their association with women.