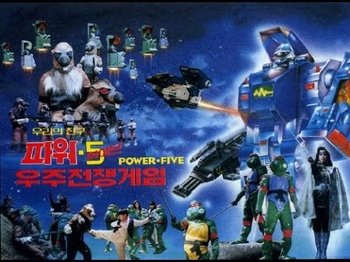 Our Friend Power 5 is a Teenage Mutant Ninja Turtles and Challenge of the GoBots Mockbuster movie made in South Korea in 1989. The film uses elements of both live-action and animation, and was made alongside merchandise, like toys and a board-game, all produced by Popeye Toys.

A group of turtle aliens from the planet BattleStar, along with their princess, are being chased down by the evil Shark Gang. After their ship is destroyed, they wind up on Earth, where the Shark Gang comes to find them. They get discovered by some human characters, and Hilarity Ensues, as the turtles and their new-found friends struggle to adapt to living on Earth, and prepare to defeat the Shark Gang once and for all...

No official English translation exists, but one was made by Phelan Porteous and a friend for the sake of review.