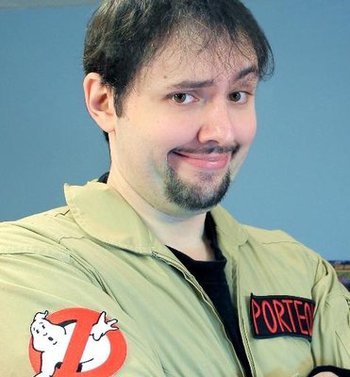 I don't like this movie,
It doesn't look too friendly,
This bootleg is so fake,
That toy is gonna break.
Phelous, don't let me down,
You need to be around,
Grab that chocolate pizza and leave a like because I want one!
— "Oh Phelous" (post-2018 version), Phelous' ending theme by Ze SadPanda...
Advertisement:

Phelan Porteous (born September 4, 1983) is a Canadian guy who makes funny videos on the Internet. His claims to fame are his reviews of really bad horror movies and Disneyesque mockbusters, both B-grade and big-budget, and Mortal Komedy, a parody of the Mortal Kombat series. He's also well-known for being a Meta Guy who mocks the hell out of poorly-used tropes, as well as his unique delivery which involves lots of deadpanning with occasional bits of hamminess. He also used to die a lot in his reviews, but that gag's (mostly) been retired.

His main review show used to have no official name (a fact that was lampshaded within the series itself), but it's since been dubbed "Phelous and the Movies" after a seemingly-random title given to the show on IMDB. The show was also referred to as "Phelous Who" for a short time and given an accompanying title sequence, likely because of all the shoutouts to said series present in his videos. The title sequence has since been retired, with the explanation given that he wanted to make better use of the title cards drawn for his episodes. He also has a couple of other video series: Bootleg Zones, which focuses on bootleg and knockoff toys and video games of varying quality (and its spinoff, Miraculous Merchandise Zone, which looks at official products); Halloweenie, a low-budget public access show with an odd skeleton man who looks at Halloween-related items and topics; and episode-by-episode reviews of Mortal Kombat: Conquest, Mortal Kombat: Defenders of the Realm, and Ninja Turtles: The Next Mutation.

that he was leaving Channel Awesome. He had been with the site since December 2008.

On June 19, 2020, Phelous uploaded a video called "Beauty and the Beast (Dingo Pictures)

. Rather than a review, it is an original animated video, retelling the Beauty and the Beast story while making fun of Dingo Pictures. Since this video is a massive break from Phelous' other videos and has its own self-contained story, please put tropes for that video HERE.

His videos can be viewed here

. A frequent collaborator with wife Allison Pregler, and the two often appear in each other's videos.