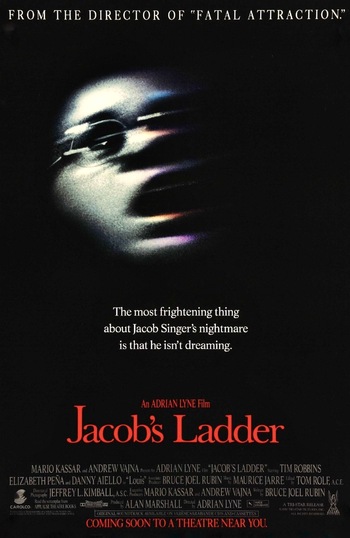 The nightmares he keeps having are tearing his life apart, one day at a time. They might be after-effects of Post-Traumatic Stress Disorder from his term of military service in The Vietnam War. They might be side-effects of a secret and illegal drug trial that he and his platoon were unknowingly exposed to. Or they may be a result of his own mind slipping into insanity from the trauma of his young son's death.

But there is still another possibility that terrifies Jacob, one that day by day seems more and more likely: the demons and monsters he keeps seeing — out of the corner of his eye, hiding in the shadows, lurking in his darkest nightmares — might be real. And if they are, then they're coming for him — and there's nothing he can do about it.

This movie was one of the primary inspirations for the Silent Hill franchise. Macaulay Culkin, in an uncredited performance, appears as Jacob's deceased son, Gabe. Patricia Kalember appears as his ex-wife, Sarah. Eriq La Salle and Ving Rhames play a couple of his fellow Vietnam vets. And Lewis Black shows up as his doctor.

A remake was released in 2019, helmed by The Perfect Guy director David M. Rosenthal.

No relation to the Jacob's Ladder Trilogy books by Elizabeth Bear.