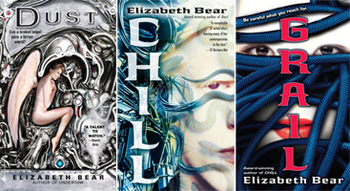 The Jacob's Ladder trilogy is a science fiction series by Elizabeth Bear.

Hundreds of years ago, the colony ship Jacob's Ladder was launched from the dying Earth by a fanatical religious cult in order to colonize a new world. However, its journey has not been an easy one. Following a catastrophic meteor strike called the Breaking, a civil war erupted between the engineers and the command crew and divided the ship between the warring factions of Engine and Rule. Worse, the governing AI of the ship was fractured by the disaster, dividing into a vast host of squabbling subsystems with no desire to work together. Three of the most powerful fragments now war with each other for control of the ship: Jacob Dust, the Angel of Memory; Samael, the Angel of Life Support; and Asrafil, the Angel of Weapons Systems. Unless the fractured computer and crew can reunite, the vessel is doomed. And the task of saving the world-ship falls to two unlikely girls: Perceval, an Exalt noble from Engine; and Rien, a Mean servant from Rule.

The series consists of Dust, Chill, and Grail.

Not to be confused with the film Jacob's Ladder. For a freeware game with a similar premise, see Iron Gaia.