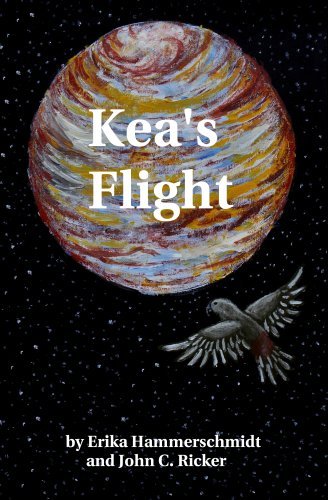 Kea's Flight is a 2011 science fiction novel by John C. Ricker and Erika Hammerschmidt. In the twenty-fifth century, humans have learned how to detect genetic disabilities in utero. Abortion is outlawed, so unwanted embryos are removed, cryonically preserved, and sent away on starships staffed by convicts and robots to colonize new worlds.
Advertisement:

Karen Anderson, aka Kea, was rejected for having genes associated with Asperger's syndrome. She has spent her whole life on a ship nicknamed the Flying Dustbin, which will arrive on the planet New Charity III when she's twenty-one. The ship is run by oversimplified, draconian rules, and the kids are allowed almost no freedom or privacy. But at age 14, Kea befriends an autistic boy named Draz, and the two start to communicate in secret. Over time more and more kids are added to their circle, and as they grow older they fight to gain control of their fates.

Two sequels, Kea's Landing and Kea's Migration, are being written.