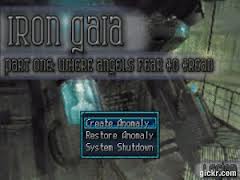 Iron Gaia is a freeware science-fiction JRPG, made in RPG Maker. The first installment, subtitled “Where Angels Fear To Tread”, was released in 2003, and is about Armand Carter, an amnesiac structural engineer who wakes up from cryo-sleep aboard the Iron Gaia space station, a place which houses millions of other humans like him. It is controlled by a insane, split-personality AI, GAIA, which keeps all the people in cryo-sleep, waking them up only for its experiments. There are also seemingly human Celestials that claim to be angels of GAIA. With only Rover, a friendly personal assistance robot, by his side, Carter must learn what is going on, and then hopefully defeat GAIA.

The game had a short P.O.V. Sequel, Iron Gaia: Virus, which was about Slade and his escape from the now-crashing Iron Gaia after the events of the first game, and filled in many blanks in the original, such as the survival of Major Tom Brighton, the formation of rebels, or the reason for Gaia going insane. This was to be the end of the series: even though a true sequel, called Mana From Heaven, was teased at the of the original, there's been no progress on it, and it was abandoned in all but name.

The Systems Malfunction setting serves as a sequel-of-sorts to these games, detailing the galactic civilization that emerged from the ruins of Iron Gaia after it crash-landed on Earth.

The original game and Virus can be downloaded from these

links. A Let's Play of the original Iron Gaia can be found here.