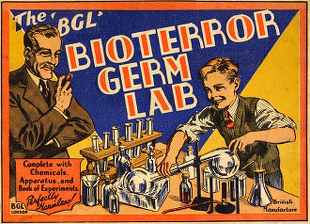 Now you too can create devastating pathogens from the comfort of your own home!
"While the individual viruses had proven to be non-lethal in testing, Paxia had engineered a sort of genetic puzzle box. When more than one of her viruses infected a host, they assembled the fragmented pieces of a single, labyrinthian genetic code. The genome of a plague."
— The Greening Wars
Advertisement:

So The Plague is wreaking havoc on the world's population. Maybe Super Flu has killed millions, or some unknown biological agent is causing people to snap and kill each other. Heck, maybe we even have a good old fashioned Zombie Apocalypse on our hands. Either way, it's safe to say that for most of humanity, these are not fun times. How could things get much worse, you ask?

By the revelation that the disease in question has been manufactured by genetic engineering, and possibly is distributed by humans. The untold amount of death and destruction has been directly caused by the foolish or malicious action of Man himself.

It may have been designed for use as a biological weapon, or an unexpected result of an experiment gone wrong. Perhaps we just shouldn't have let monkeys watch TV for too long. However it came to be, it has now been unleashed on humanity at large, and has almost certainly gone far beyond what its designers had originally intended.

In works that involve these types of diseases, expect an Aesop about the hubris of man, and the evils of unchecked science. In most cases, those behind the creation of the disease will often fall victim to it as well, either directly or indirectly. Scientists who worked on the original project may cry out "My God, What Have I Done?"

Synthetic Plagues are favorite weapons of Mad Scientists and Plaguemasters alike. Note that in works where multiple sentient, technologically advanced species exist, any disease created by one of those species would qualify. The key defining point in this case is that the disease in question does not occur naturally, but is instead created or nudged along by intelligent creatures.

A Sub-Trope of The Plague, and one that can often serve as a form of Depopulation Bomb and/or Superweapon. Compare Mystical Plague, The Virus, Apocalypse How, and Genetic Engineering is the New Nuke.