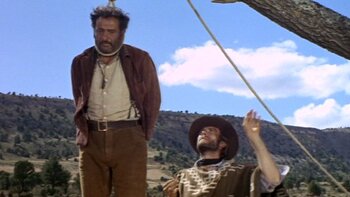 When a character is suspended by a noose or knot tied around their necks with the intention of that character dying.

Was once one of the most common ways to conduct a Public Execution and remains a primary method of capital punishment in countries and regions across the world. In such cases, hanging can lead to Dead Guy on Display if the body is not immediately taken down or is intentionally left up to Make an Example of Them and possibly dishonor the deceased. This form of public execution is still a genre staple in The Western and in Pirate Stories due to its historical use in both settings and is a favorite of the Hanging Judge.

Hanging is also a common way people choose to take their own life in real life and is a very popular way to have a character commit suicide. According to The Other Wiki, it was the most prevalent way to commit suicide in pre-industrial societies given its relative simplicity and as late as 2008 was still the most widely used method of suicide globally. Ideas regarding the shamefulness of this method vary from place to place and over time, with some civilizations—like those of ancient Rome—refusing to bury those who do such an act and others believing that this method more than others will allow one's spirit to linger and haunt the living, thus carving out a justifiable reason to do so. This latter belief has been found to be prevalent in traditional Chinese culture.

A victim of a hanging may respond by Clawing At Their Own Throat to try to relieve the pressure before succumbing to unconsciousness or death. If they're lucky, someone might come save them by shooting the rope, cutting them down, or loosening the noose around their necks. If they're The Man They Couldn't Hang, then they may ask The Executioner when they'll be done.

Can also be used as a form of torture, using the noose to cut off a victim's air supply since contrary to popular depictions of Choke Holds, it takes several minutes for a suffocating person to pass out, let alone die. Because it does not require mutilation or drawing blood, hanging as torture can be used as a Jack Bauer Interrogation Technique with The Hero using the minutes it takes before the victim blacks out to get the information they need. That said, when done professionally, hangings usually lead to death by Neck Snap and not just asphyxiation.

Note that the "gallows" in Gallows Humor refers to the wooden frame used to hang people from and it is still quite common to see creators make use of Gallows Humor in scenes between characters awaiting their own hangings.

Do not confuse this with Unwilling Suspension where a victim is simply hanging helplessly around either by their wrists, torso, or ankles.

Since this is a Death Trope, spoilers relating to character deaths will be unmarked.