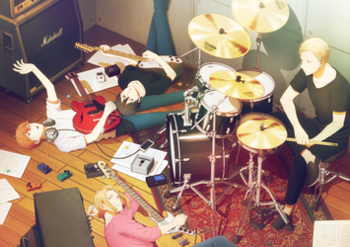 Given (ギヴン; Givun) is a Boys' Love manga written and illustrated by Natsuki Kizu that began in 2013. Currently ongoing with 5 volumes, it is serialized in the Josei BL magazine Cheri+.

High schooler Ritsuka Uenoyama is the electric guitarist for a band composed of himself, bassist Haruki Nakayama, and drummer Akihiko Kaji. He becomes a reluctant guitar teacher to Mafuyu Sato, a shy classmate, after repairing the broken strings on Mafuyu's Gibson ES-330. While Ritsuka is initially baffled by why Mafuyu always carries the guitar around despite having absolutely no idea how to play it, he soon discovers that Mafuyu is an exceptionally talented singer, and invites him to join the band.

An anime adaptation by Lerche aired in the Summer 2019 season, with a different voice cast from the Drama CDs. The anime is syndicated by Crunchyroll, which simulcasts the series outside of Asia.

Tropes present in Given include: