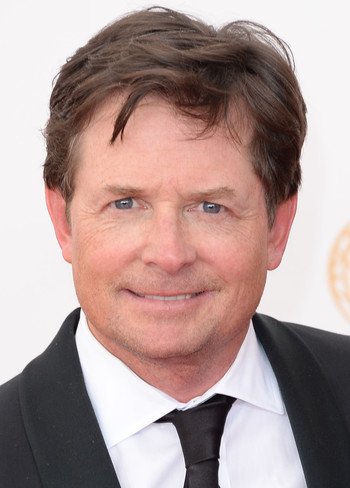 This is heavy...
"I enjoy my work as an actor. But to make a difference in people's lives through advocacy and through supporting research - that's the kind of privilege that few people will get, and it's certainly bigger than being on TV every Thursday for half an hour."
Advertisement:

Michael Andrew Fox, OC (born June 9, 1961), known as Michael J. Fox, is a Canadian-American actor, author, voice over artist, and woobie with a face that seems born to make us laugh.

He started off as a Teen Idol in The '80s, making a dual hit on both film and television as Marty McFly from the Back to the Future trilogy (1985-1990) and Alex P. Keaton from Family Ties (1982-1989), for which he won three Emmy Awards and a Golden Globe Award. A rather popular but generally less famous role was the main character in Teen Wolf. He also did some serious stuff that almost no one remembers, and he's acknowledged that he isn't an actor who can "blend" into a wide variety of roles.

In The '90s, he played Mike Flaherty on Spin City (1996-2000), for which he won an Emmy, three Golden Globes, and two Screen Actors Guild Awards. He was also Jon Stewart's first guest as host of The Daily Show in 1999.

Fox was diagnosed with Parkinson's disease in 1991, and disclosed his condition to the public in 1998. Fox semi-retired from acting in 2000 as the symptoms of his disease worsened. He has since become an advocate for research towards finding a cure.

Despite his "retirement", he has guest starred on various television shows and also some voice acting work, most notably Stuart Little and Atlantis: The Lost Empire, where his distinctive boyish voice adds to the generally benign nature of his characters. Some of his guest spots have him pigeon-holed as a man with an illness; when he guested on Boston Legal he had lung cancer, when he guested on Scrubs he had OCD and when he guested on The Good Wife he had a neurological disorder.

He also appeared as himself in his prime-time special Michael J. Fox: Adventures of an Incurable Optimist (A Personal Journey of Hope) in May 2009. He made a surprise appearance at the closing ceremonies of the 2010 Winter Olympics, where he declared everyone attending to be honorary Canadians - which he then claims means that Canada won every gold medal of the games! On May 4, 2010, he (for lack of a better word) trolled Stephen Colbert on his own show. In 2011, he also trolled Larry David on his show.

He made his return to TV with the sitcom The Michael J. Fox Show, which ran from October 2013 to January 2014. In 2020 he publicly stated he was no longer actively seeking acting roles due to his Parkinson's making it hard to memorize lines but would still consider a taking an offered part if it was a great one and worked for him.

He has four children with his wife, actress Tracy Pollan.