Film / The Secret of My Success 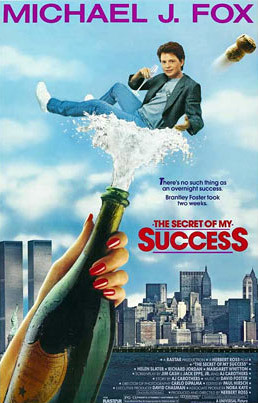 The Secret of My Success is a 1987 American comedy film produced and directed by Herbert Ross, and starring Michael J. Fox and Helen Slater. The screenplay was written by A.J. Carothers, Jim Cash and Jack Epps, Jr. from a story written by Carothers.

Well educated, Kansas born and raised, Brantley Foster sets out to make his fortune in New York. Unfortunately, when he arrives, the job he is promised fails to materialise, so he reluctantly looks up a distant relative, Howard Prescot, who runs a multimillion dollar corporation. Starting at the bottom, doesn't appeal to Brantley so he pretends to be an executive, whilst keeping this a secret from "uncle" Howard and Brantley's dream girl Christy.