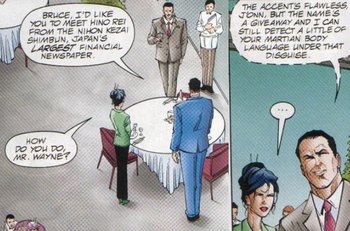 Fictional characters going undercover need snazzy aliases so that they aren't recognized. Can't think of what to call yourself, and the scenery isn't providing any helpful hints? Just use the name of a character from fiction or the name of a real famous person! No one will ever know who you really are.

Compare with Line-of-Sight Alias, Sdrawkcab Alias, Sue Donym, I'm Mr. [Future Pop Culture Reference] (when the character has traveled back in time and is using a name from the future) and Themed Aliases (when a character makes a habit out of doing this). Subtrope of Lazy Alias. See also Unusual Pop Culture Name, when said obvious pop culture reference is their real name, often to their embarrassment.

Note that there has to be special significance behind a real person using the name of a fictional character before a Real Life entry can be added; if we had to count how many instances people use the names of cultural or pop-cultural icons as gaming aliases, we'd be here until the heat death of the universe.

Daniel claims to be the Great and Powerful Oz

Daniel claims to be the Great and Powerful Oz