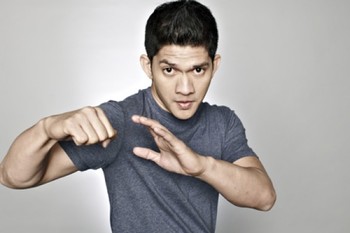 Iko Uwais (real name Uwais Qorny; born February 12, 1983 in Jakarta, Indonesia) is an Indonesian actor, choreographer and martial artist. He became famous for his work with director Gareth Huw Evans, leading him to become famous for leading roles in films like Merantau and The Raid.

He is an expert in the Indonesian martial art of pencak silat, which led him to be discovered by Evans when the latter was shooting a documentary about it. Among his accomplishments in the style, he placed 3rd at the 2003 Indonesian national championships, and has apparently some experience with Rival Dojos in real life.

As an actor, Uwais' characters tend to be stoic, somber badasses with a trademark Death Glare, though occasionally hiding a softer side too.