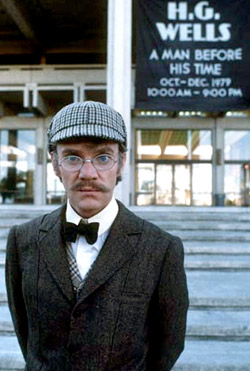 "Ninety years ago I was a freak. Today I'm an amateur."
— Jack the Ripper
Advertisement:

Time After Time is a 1979 novel by Karl Alexander and movie directed by Nicholas Meyer (which, while based on the book, was made before it was published) starring Malcolm McDowell, David Warner and Mary Steenburgen. The film was shot on location in San Francisco, showing off the cable cars, Bay Bridge, Golden Gate, the exterior of the Exploratorium, etc. It has nothing to do with the song by Cyndi Lauper (except that the movie apparently inspired the song's title).

In 1893, aspiring writer and inventor H. G. Wells (McDowell) invites some friends over to dinner, where he shows them one of his latest inventions — a device he claims can travel through time. Despite the general mockery he receives, one of them — a surgeon called John Leslie Stevenson (Warner) — takes particular interest in his claims, and not for no reason; moments after, the police intrude into Wells' home, claiming to have traced none other than Jack the Ripper to the premises. When a search reveals that Stevenson has disappeared, Wells realises that not only is Stevenson the Ripper, but that he has used Wells' time machine to escape into the future and evade justice.

Appalled at the thought of having unleashed a monster onto the social utopia he believes the future will be, he decides to follow Stevenson into the future and bring him back to face justice. Arriving in San Francisco in 1979, Wells finds that the future is not everything he thought or hoped, befriends an attractive, feminist bank clerk called Amy (Steenburgen) and discovers that Stevenson is up to his old tricks — and that Amy may be his next victim.

The book and movie were later reimagined as a 12-episode ABC TV series, Time After Time. Its trailer can be seen here