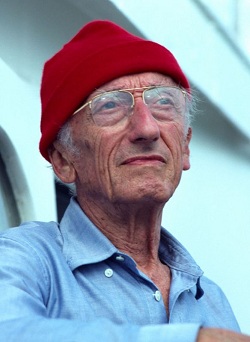 "When one man, for whatever reason, has the opportunity to lead an extraordinary life, he has no right to keep it to himself."
Advertisement:

Jacques-Yves Cousteau (11 June 1910 – 25 June 1997), more commonly known in the English-speaking world as simply Jacques Cousteau, is generally regarded as the greatest oceanographer to have ever lived.

Born in 1910, he entered the French Ecole Navale in 1930 and graduated as a gunnery officer. An automobile accident prevented him from becoming an aviator as he originally wished, so he turned his naval interests elsewhere* Cousteau was assigned to naval intelligence and later was involved in covert operations in Italy, China, and the USSR, and worked in opposition to the Vichy government during World War II.. During the early 1940s, Cousteau began creating underwater documentaries. During these early documentaries, he helped develop the aqua-lung, which would evolve into the scuba systems that are now in use.

In 1950, Cousteau founded the French Oceanographic Campaigns, and in 1953 published what would be the first of many, many books. In service of his new career, he purchased an old minesweeper ship and refitted it as a research vessel called the Calypso to effectively go to war against ignorance about the sea. Throughout the 1950s, he helped develop new mini-submersibles for underwater exploration. In 1960, he organized a successful protest against the dumping of radioactive waste in the Mediterranean. He then created a TV documentary series in the United States initially called The Undersea World Of Jacques Cousteau, narrated by Rod Serling. The 1970s saw Cousteau lose valuable assistants to assorted accidents, including his younger son Philippe's death in a Catalina flying boat crash. He continued to remain active despite this, producing additional documentaries over the rest of his life. Among the tributes to him is the #1 hit song "Calypso" by John Denver

("Aye, Calypso, the places you've been to/The things that you've shown us/The stories you tell…") and the French-accented narrator in SpongeBob SquarePants (though most people tend to forget this).

Cousteau passed away in Paris in 1997, two weeks after his 87th birthday, which unfortunately led to bitter infighting amongst his relatives over his legacy. Despite that, his elder son Jean Michel endeavors to carry on his work to this day.

Cousteau is remembered for having pioneered the field of oceanography, underwater photography, and documentary film-making, and was so charismatic while doing so it has become nearly impossible to depict oceanography in fiction without specifically referencing Cousteau one way or another. And to say that he is to oceanography what Einstein or Hawking is to physics would not be out of line. It's simply a bare fact.

A French biopic was released in 2016, starring Lambert Wilson as the man.