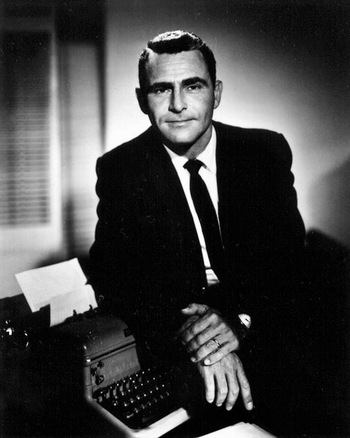 Submitted for your approval: an ordinary man, just like any other gifted young American student before the outbreak of the war. This man enlists to serve his country, but as a paratrooper, he sees things no man was meant to see.

Returning home after his service, he is put through college on the GI Bill and becomes a well-known TV scriptwriter. But late at night, in his dreams, the war revisits him. As his visions become ever stranger, ever more disturbing, they drive him to create, and thrust himself into... The Twilight Zone.

Supplied the page quote on:

Tropes associated with Rod Serling include:

They say life is but a whisper, leaving just as quickly as it arrives. This man was killed not by machines of humanity, nor by acts of nature, nor by seeking seclusion within the recesses and infinities of his mind...but by a faulty heart, which removed him from the coil of mortality while men of medicine tried valiantly to keep him from that fate.
Since the twenty-eighth day of June in the year nineteen hundred and seventy-five, this man has led a new life inside the world he created. He takes pride in those who tell new tales, and by request will walk into the spotlight to give an appropriate spiel at each beginning and end.
Rodman Edward Serling, a man who cannot leave his own little world yet takes this fact as comfort, living out a pleasant eternity...in The Twilight Zone.