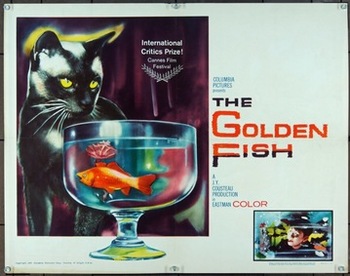 The Golden Fish (Histoire d'un poisson rouge, "Story of a Goldfish") is a 1959 short film (19 minutes) from France, directed by Edmond Sechan.

A young Japanese boy lives with his mother somewhere in France, apparently a drab industrial area where his mother works in a factory. Although there are no scenes of overt bullying the boy doesn't seem to socialize much with his white schoolmates, instead going to and returning from school alone.

One day the boy is sent out to get milk. He walks through an amusement park and gets distracted by a roulette-style game in which the prize is a fish from a bowl. The boy wins a goldfish (the only goldfish in a bowl full of black-colored fish) and takes it home. The fish gets a home in a little goldfish bowl by the window. One day the boy goes off to school and leaves the window open, which is bad, because the local alley cat shows up.

Edmond Sechan was a cinematographer on French short film The Red Balloon, which told a similar story in a similar dialogue-free manner. He later directed another Oscar-winning short, One-Eyed Men Are Kings. The Golden Fish was produced by none other than Jacques Cousteau, better known as the maker of a whole host of oceanography documentaries.