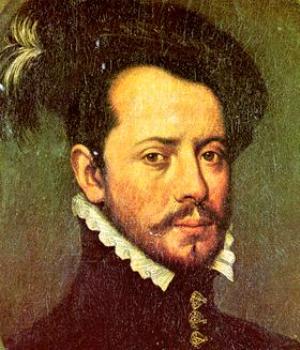 "...the simple name of Cortés was so celebrated and well regarded, both in the Indias as in Spain, that just like that was the name of Alexander in Macedonia; among the Romans, Julius Caesar and Pompey and Scipio; among the Carthaginians, Hannibal; and in our Castile, Gonzalo Hernández, the Great Captain."
—Bernal Díaz del Castillo, The True History of the Conquest of Mexico
Advertisement:

Hernándo Cortés de Monroy y Pizarro Altamirano, 1st Marquess of the Valley of Oaxaca (1485 – December 2, 1547), was the famous Spanish conquistador who achieved the Spanish Conquest of the Aztec Empire in 1521 after a few years in battles, toppling the epoymous empire.

Born in the lower nobility of Extremadura, cradle of many conquistadores, Cortés traveled to Cuba in the search of fortune, which came to him in earning the job of mayor of Santiago de Baracoa, the second Spanish city founded in the island. However, his dreams and ambition reached much farther: against the wishes of Diego Velázquez, the corrupt governor of Cuba and soon his Arch-Enemy, Cortés sailed off in an expedition to the continent and founded the city of Veracruz, from where he initiated a calculated campaign to hijack the nearby Aztec Empire and its many riches. Cortés, a man without formal military experience but with a a love for ancient Greek and Roman story, played indigenous politics like a statesman of yore and attained a multi-national alliance with the confederacy of Tlaxcala, the Totonac peoples, and every other indigenous state that wanted the Aztecs dead, all of which would be unvaluable local allies for the rest of the entire Spanish conquest of America. Although his first attempt to seize the empire top down was ruined by Velázquez trying to illegally arrest him, Cortés gathered a multi-national army and conquered the Aztec capital by force, being then appointed governor of the newly called New Spain.

His late career was marked by constant conflicts with his political enemies, as well as the discontent of Spaniards who believed (apparently with some reason) Cortés was taking too much of the booty for himself. In order to keep his men busy and rich, Hernán initiated the Spanish Conquest of the Maya, although this backfired when one of his lieutenants revolted against him in Honduras and aligned with Velázquez. Although Cortés ultimately solved the issue and had the traitor assassinated, he decided to go himself there with an entire army just in case, and in the process he committed the mistake to send some positively untrustworthy people back to warm his seat in México. After a hellish journey through the jungle, in which his mental health was compromised by fevers, wounds and a likely clinical depression, Cortés was officially considered MIA, and under this premise, his political power in New Spain disintegrated, not being able to fully restore it upon his return. He had somewhat better luck in the Spanish court, where King Charles V compensated his lost governorship by making him captain general and a marquis.

The rest of Cortés' life was uneventful, spent in hosting parties with the new Viceroy Antonio de Mendoza and promoting naval expeditions around the Pacific coast from his new marquisate, eventually discovering California. He could not travel very far himself, though - by this point, he was respected and feared enough in New Spain that conflicts calmed down at the moment they heard Cortés was coming, and several factions of both Spaniards and indigenous wanted his presence in order to arbitrate among them or just to avoid the uprisings that might arrive with a new bout of disappearance (to show his status overall, it used to be entertained back then that Cortés had all the resources and connections to revolt and proclaim himself king of the New Spain if he wished). He did have a brief return to Spain and participated as an informal consultant in the disastrous 1541 Algiers expedition, but he was not consulted too much and ended up losing a ton of money in the process. Cortés then died of illness in the palace of a friend in Spain before he could be given license to return to America.

Being himself a lover of many women, without much regard for race or marital status, Cortés was one of the first personal promoters of mestizaje in México, an attitude especially useful given the indigenous custom of Altar Diplomacy. Although far from being the first Spaniard to do the deed, Hernán himself fathered a mestizo son (Martín, who would become King Philip II's page) with his underrated indigenous adviser La Malinche and a daughter (Leonor, whose descendants are still out there) with Aztec princess Isabel de Moctezuma, as well as another daughter from an unknown princess that was born disabled. He left eight other children from his successive Spanish wives. Francisco Pizarro, his counterpart in the Spanish Conquest of the Inca Empire, was a distant maternal uncle to Cortés, although contrary to popular belief, it seems they never personally met (Francisco's half-brother Hernando did met Cortés in Spain, briefly so).

Needless to say, you'll get different opinions on the man depending on who and where you ask. By all accounts, though, Cortés' recorded biography should be separated from his colourful reputation in pop culture and all the modern charge that has been piled upon him. In spite of the stereotype, Cortés never really went out of his way to make a difference between whites or natives in his conquest, rather preferring to divide people between those who were in his side and those who were not, which helped him to secure the support of many indigenous powers that stayed loyal to Spain for centuries after his death. Indeed, he worked to rebuild and develop the native populations he seized by force, and spent several points of his career basically acting as the chief of police of the Indies against the abuses of lesser conquistadores, much to his chagrin. Also, while he was still obviously a conqueror and a brutal Combat Pragmatist in battle, he was first and foremost armed with diplomacy and was a believer in Defeat Means Friendship, to the point some of his men reportedly snarked that, like his idolized Alexander the Great, he often treated the vanquished better than the victors. Admittedly, one does not simply topple empires by being a unsympathetic moron.

Of course, completely reliable information on him is pretty scarce. One of his close lieutenants, Bernal Díaz del Castillo, wrote a insanely detailed chronicle that attempted to distance itself from both flattery and slander, The True History of the Conquest of Mexico, and as you can imagine, historians have been debating for centuries about its degree of faithfulness to the real facts.