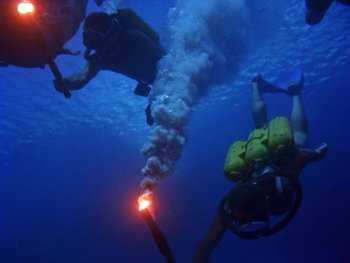 The Silent World is a 1956 documentary film co-directed by Jacques Cousteau and Louis Malle.

It is an account of scientific voyages taken by Cousteau, the world-famous oceanographer, aboard his ship, the Calypso. Cousteau and his crew roam far and wide, exploring the Mediterranean Sea, the Red Sea, and the Indian Ocean. Cousteau's men demonstrate the effectiveness of scuba gear over old-timey diving suits. They take samples of coral reefs and the fish that live therein. They observe sea turtles laying their eggs on a remote island. They map the sea floor with sonar. They even manage to find and explore a sunken World War II freighter. They use underwater cameras to take spectacular footage.

They also kill a lot of animals. A lot. It's one thing when they harvest for breakfast the fish that leap up onto the deck. It's maybe defensible when divers from the Calypso snatch up lobsters from down below and bring them to the ship to eat. But it's not so defensible when Cousteau's men take joyrides on sea turtles underwater, as the turtles struggle to make it to the surface and breathe. In another scene Cousteau's crew elect to get a representative sample of the fish that lurk in coral reefs by dynamiting the reef and harvesting all the fish that are killed. In the worst scene, Cousteau's crew massacres a whole school of sharks that are only there to feast on the fresh corpse of a baby sperm whale. The good news is that Cousteau learned his lesson and for the rest of his career would take a leading role in the environmental movement.

First film directed by Louis Malle, who would go on to a brilliant career as a director of narrative feature films (Au revoir les enfants, Atlantic City, and many more).