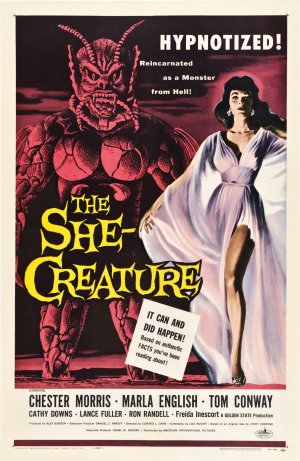 The She-Creature is an American International Pictures horror film from 1956, originally released in a double-feature package with It Conquered the World.

Inspired by the success of the best-selling book The Search for Bridey Murphy, this movie employs a premise similar to The Undead — using hypnosis to regress a woman back to one of her past lives. This is being performed by Dr. Carlo Lombardi, a slimy, repulsive stage performer with hypnotic mojo and a chip on his shoulder. Lombardi happens to be keeping a woman, Andrea, against her will as the star of his "past-life regression" act. On the side, he's trolling the local police about a series of mysterious murders happening around the carnival as he predicts each one. The lead detective can tell he's guilty but he's always got an ironclad alibi.

Timothy Chappel, a slumming businessman who hears about Lombardi's predictions, decides to make him into the next big thing. Predicting each of the continuing murders works wonders for publicity. It turns out that Lombardi uses Andrea to summon the titular She-Creature (supposedly a previous incarnation of her, from prehistoric times!) to emerge from the ocean and start killing people. It's up to the newly minted Love Interest of Lombardi's thrall, a calm "psychical" researcher named Ted Erickson, to save the day. Can he prevail?

The She-Creature contains examples of the following tropes: