Film / March of the Penguins 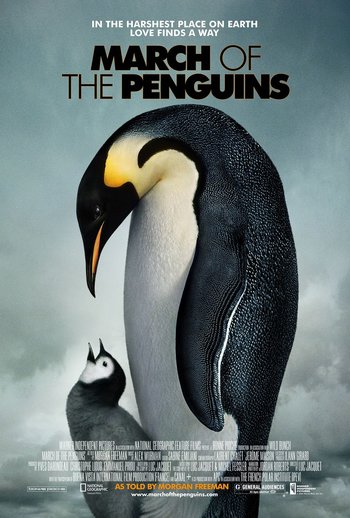 "In the harshest place on Earth, love finds a way."
—Tagline
Advertisement:

March of the Penguins (La Marche de l'empereur) is a 2005 Nature Documentary about the yearly journey of Emperor Penguins in Antarctica to mate and raise their chicks. It was originally dubbed in French but is better known for the English version narrated by Morgan Freeman, which won the 2005 Academy Award for Best Documentary.

Directed by Luc Jacquet. Compare Werner Herzog's Encounters at the End of the World, another Antarctic documentary made the very next year. A sequel, March of the Penguins 2: The Next Step (L'Empereur) was made in 2017 and released on Hulu in 2018.

Tropes of the Penguins: