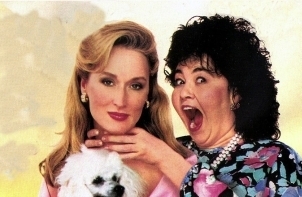 Revenge is sweet... and low.
"The story of the greatest evil known to man... his ex-wife."
Advertisement:

She-Devil is a 1989 comedy film directed by Susan Seidelman and starring Roseanne Barr, Meryl Streep, and Ed Begley, Jr., based loosely on the 1983 English novel The Life and Loves of a She-Devil by Fay Weldon, and a British miniseries the novel also spawned.

Ruth Patchett (Barr) is a frumpy housewife and mother of two whose accountant husband, Bob (Begley), is an opportunist whose affection she is desperate for. He meets romance novelist Mary Fisher (Streep) at a banquet and makes her a client, becoming very friendly with her in the process... too friendly. After Ruth gets fed up with Bob's infidelity and general poor treatment of her, she schemes and plans her ultimate revenge against him, which ends up to be a long, complicated, and darkly funny process.

It received mixed reviews at the time of release, with criticism mostly going to Roseanne's performance (or the fact that she was cast at all alongside Meryl Streep) and deviations from the original story, but presently is somewhat of a cult classic.