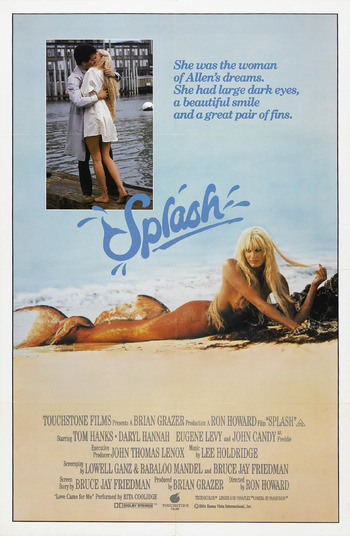 It is said that everyone has a soul mate, someone with whom they are destined to fall in love and be with for the rest of their lives, regardless of age, gender, geography...

Splash is a 1984 fantasy romantic comedy directed by Ron Howard, surrounding the fairy-tale romance between Allen Bauer (Tom Hanks) and the mermaid (Daryl Hannah) who rescued him from drowning as a boy. Allen grew to adulthood, believing the young mermaid he saw in the water was only a hallucination, until she again saves him from drowning - but in doing so appears on the radar of Dr. Walter Kornbluth (Eugene Levy), an eccentric, disgraced scientist who wants to prove the existence of mythical creatures like mermaids.

The mermaid seeks him out on land (she develops legs when her tail is dry), coming ashore on Liberty Island to track him down with information from his wallet, dropped during his latest dip in the ocean. As she has no concept of clothing, she is arrested for indecent exposure, and the cops release her into Allen's custody, based on the wallet she carries. But Kornbluth is hot on her trail, and he has scientific pursuits in mind for her...

Can these star-crossed lovers find romance? Can she convince Allen that his series of failed romances are just destiny knocking him on the head? What will their kids look like?

The film was followed by a TV movie sequel Splash Too which recast all the lead parts.

Splash was the first movie released by Disney under the Touchstone Pictures label (then known as "Touchstone Films").

A remake has been announced, with a twist - the main characters have been Gender Flipped. Channing Tatum is attached to star in it.

Allen Bauer thought he'd never find the right trope. He was only half wrong: