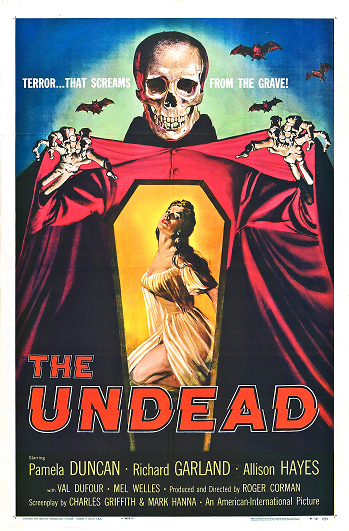 This article is about the film. For actual undead, go here.
Advertisement:

Two psychiatrists and a hooker walk into an office. Set up to a bad joke or set up of a bad Roger Corman movie?

You don't have to choose!

An ethically challenged "psychical researcher" by the name of Quintus has hired a Brooklyn streetwalker named Diana for $500. But in this movie, she'll be turning the trick of time travel. See, Quintus believes he can put Diana into a hypnotic trance and send her back into her past lives. His colleague, a somewhat homely bald man, is skeptical. Turns out that Quintus is kind of an evil genius. He succeeds in putting Diana into that trance and he succeeds in sending her back in time to a past life as "Helene," who is wrongfully accused of being a witch and thus faces execution in the morning. Score one for Quintus.

What follows is a somewhat mangled string of plots, counter-plots, knights, witches, "enchanted" gravediggers, imps, taverns, more time travel and princes of darkness. Yes, Satan is an important player in Mr. Corman's little production. As Quintus explains a few times, never very clearly, Diana/Helene is left with a choice: because Diana helped Helene escape prison before her execution as a witch, Helene can either live out her life in Dark Age Europe with her mediocre love interest, and in doing so snuff out the existence of her future lives from the time paradox, or go back and allow herself to get beheaded at dawn on schedule, thus ensuring all future iterations of Diana will exist and flourish.