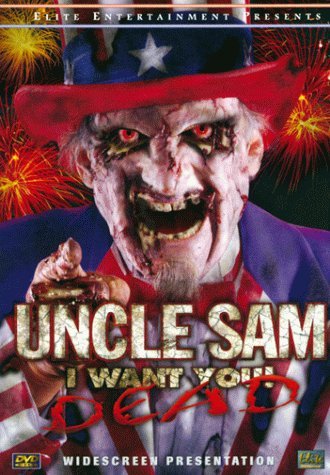 He red, white and blew 'em away.
"I thought ghosts were supposed to come out in the dark, not in broad daylight on the Fourth of July!"
— Jed Crowley
Advertisement:

Uncle Sam is a 1997 Slasher Movie, created by the duo of Larry Cohen and William Lustig.

During the Gulf War, sadistic mercenary door gunner Master Sergeant Sam Harper (David Fralick) was killed along with his crew when their helicopter was shot down by friendly fire over Kuwait. Due to the seclusion of the impact site, Sam's charred corpse went undiscovered for three years, but when it was found, he randomly sprung to life and murdered two fellow soldiers, a sergeant and a major, before falling inert. After the double homicide was presumably blamed on enemy forces, Sam's body was collected and shipped to his hometown of Twin Rivers, where it was left in the possession of his family; his wife Louise, who is currently dating local Deputy Phil Burke, (Matthew Flint) and sister Sally (Leslie Neale), whose son, an awkward and extremely patriotic boy named Jody (Christopher Ogden), idolized Sam, unaware of his violent and troubled past.

As Sam's family and friends —of which includes his mentor, former sergeant Jed Crowley (Isaac Hayes), who regrets filling Sam's head with stories of the glories of war, pay their reluctant respects to the dead man, the town prepares for its Fourth of July celebration, which local and extremely corrupt congressman Alvin Cummings (Robert Forster) will be attending, in an attempt to salvage his public image. Unfortunately for Twin Rivers, Sam comes out of hibernation when the clock strikes midnight on July 3rd, kills a perverted man for his Uncle Sam costume, and sets about murdering all those he views as unpatriotic, including but not limited to flag burners, draft dodgers, tax evaders, stoners and slimy politicians. When Sam ultimately crashes the town's Fourth of July celebration, Jody and Jed, and a crippled boy named Barry Cronin with an inexplicable connection to Sam must work together to send the psycho soldier back to Hell.