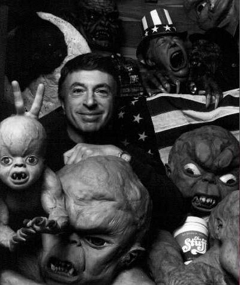 Larry Cohen and his children.
Life has been good to me. I keep making pictures. Every year I make something. As long as I keep working, I have nothing to complain about. And the films I've made have all had some point to them. Otherwise, I wouldn't have felt they were worth doing. You have to have some direction in which you're headed and a destination which you have to arrive at by the end of the film, so that you feel it was a satisfactory trip. Some kind of personal statement has to be made.
Advertisement:

Lawrence G. "Larry" Cohen (July 15, 1936 - March 23, 2019) was an American film writer, director, and producer best known for his low-budget works with heavy social commentary. He originally made his way through Hollywood back in the 1960's as a screenwriter and producer. Having gained enough money and a strong enough reputation to start making his own movies, he created his first film, Bone (aka The Housewife). Unfortunately, it had a great deal of difficulty getting distribution and finding an audience, so consequently did very poorly in the box office. After being encouraged to write and direct a blaxploitation film, he created the considerably more successful Black Caesar. Soon after, he turned to making horror movies, for which he is probably most famous.

In his last years, he returned to writing screenplays, most of which are made-for-TV movies; his final directorial effort was an episode of the short-lived Showtime anthology series Masters of Horror ("Pick Me Up"). He died March 23, 2019 of cancer.