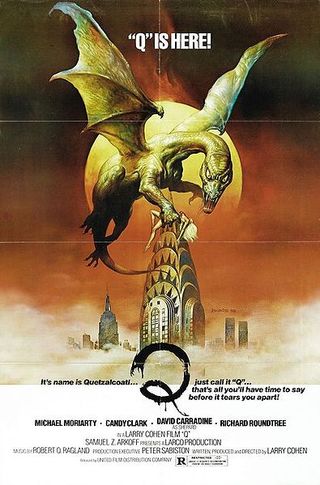 "Its name is Quetzalcoatl... just call it Q... that's all you'll have time to say before it tears you apart!"
— Tagline for the movie
Advertisement:

Shepard (Carradine) is a New York City Cop investigating a series of ritual homicides. Bodies turn up skinned alive, with the heart cut out, decapitated, and otherwise mutilated in disturbing ways.

Meanwhile, Jimmy Quinn (Moriarty) is a piano player and petty criminal who gets caught up in a jewelry-store heist caper. When things go badly, he takes the stolen jewels and flees, abandoning his fellow crooks, and loses the jewels after being hit by a taxi. He flees to a disused attic space at the top of the Chrysler building, where he finds a humongous nest near a hole in the roof.

The two plot lines come together when Shepard figures out that an Aztec Cultist priest, Kahea, has been convincing victims to be somewhat willing human sacrifices as he prays the ancient Aztec god Quetzalcoatl back into existence. Quetzalcoatl appears in the form of an enormous dragon-like creature, and nests in the top of the Chrysler building, flying out to snatch victims off of skyscrapers under construction, rooftop swimming pools, and snacking on the occasional skyscraper window-washer.

Jimmy disposes of his fellow crooks by leading them to the nest and cheering as the bird eats them, then informs Shepard where to find the nest in exchange for a promise of immunity and one million dollars, tax free. A team of NYPD cops waits at the top of the Chrysler building, and when the bird-snake-god thing returns from a hunting flight, they shoot the thing to death in a surprisingly cool action sequence

. Afterwards, Kahea ambushes Jimmy in his apartment in revenge for killing the monster and prepares to make him a sacrifice to Quetzalcoatl, but Shepard luckily intervenes and kills Kahea. Jimmy gets his one million dollars, tax free.

"Q is all you'll have time to say before its tropes tear you apart":