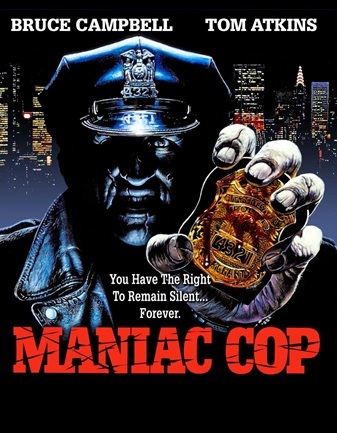 The wrong arm of the law.
"You have the right to remain silent... FOREVER!"
— A tagline so nice they ended up using it thrice.
Advertisement:

A 1988 horror movie, directed by William Lustig and produced by Larry Cohen.

The film tells a story of Matt Cordell (Robert Z'Dar), a former NYPD officer who was sentenced to prison for his excessive Police Brutality. He suffered heavy abuse in jail from the scum whom he had arrested himself and was left heavily scarred and brain-damaged from their attacks. He is now presumed by most people to be long dead. Cordell starts wreaking havok in New York by dressing as a cop and murdering innocent civilians, which leads to city-wide panic. Detective Frank McRae (Tom Atkins) is set to work on the case and is later joined by Officer Forrest (Bruce Campbell) who is framed for the killings and must clear his name.