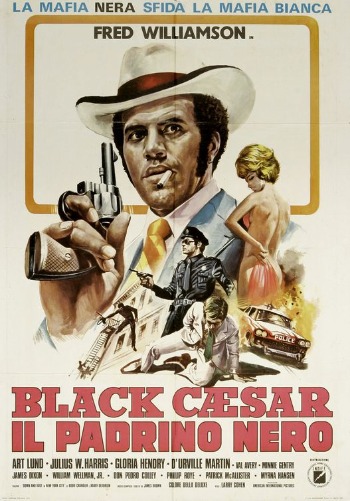 Yo, I've got ''Black Caesar'' back at the crib.
Advertisement:

Black Caesar is a 1973 blaxploitation film directed by Larry Cohen, starring former NFL linebacker Fred Williamson as a small-time mobster who builds his way up as the kingpin of a criminal empire in New York City.

Tommy Gibbs (Williamson) shines shoes on the streets of Harlem, and begins moonlighting as a mob runner to make ends meet. After one of his jobs, Tommy is severly beaten and crippled by a racist police captain, and sent to prison for assault. Tommy uses his stay to learn about the criminal underworld in New York, and promptly sets out to usurp control by leveraging a section of Harlem from The Mafia. Gibbs then spends the next several years building up an extensive criminal empire and becoming a local hero in the process. Eventually, however, Gibbs backstabs his Mafia contacts and alienates his friends and family, leading to an all-out war between his empire and the reigning kingpins of the city. At the end of the film, Tommy is shot in broad daylight by a Mafia thug, and makes his way back to his old homestead in the Harlem slums, whereupon he is attacked and presumably killed by a gang of local boys, completing his fall from grace...

...however, the wild popularity of the original film resulted in a sequel, Hell Up In Harlem, being filmed and released the same year. Rewriting the ending of the first film, Harlem replays events from a slightly different perspective. Tommy is rescued and brought to a hospital by his remaining loyal allies after his beating at the abandoned apartment complex. Incapacitated (but still holding onto a key piece of evidence that implicates the Mafia heads in New York), Tommy transfers control of his empire to his father, who attempts to negotiate for his son's safety with the evil New York District Attorney Diangelo. After Diangelo's thugs try to kill him, Mr. Gibbs takes on the role of "Big Papa" while his son recuperates in Los Angeles. When Big Papa and Tommy's ex-girlfriend (and mother of his children) Helen are murdered, he must come back to reclaim his empire (and his son, who was born in the previous film) and kill his turncoat lieutenant, Zach, and Diangelo.

Black Caesar was a hit with audiences when it was released in 1973, and was lauded for its gritty portrayal of the city and morally grey protagonist. The film also jumpstarted lead actor Fred Williamson's career, which resulted in his having to shoot Harlem on weekends while filming another movie during weekdays. The original film also benefitted from having James Brown compose the hit soundtrack. In an infamous case, Brown wrote the soundtrack for Harlem entirely on spec (without pay), but it was rejected by American International Pictures. Brown later released his rejected soundtrack as The Payback, which proved to be a critical and commercial hit.

Not to be confused with "The Black Caesar".