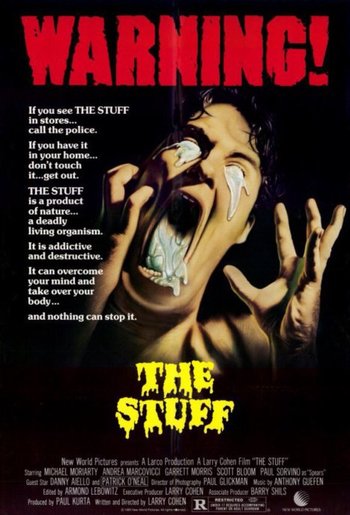 Are you eating it or is it eating you?
"Just can't get enough... of The Stuff!"
— Commercial jingle for The Stuff
Advertisement:

The Stuff is a 1985 Comedy-horror movie directed, written and executive produced by Larry Cohen about a snack food that is actually a living, mind-controlling, addictive... stuff. It also apparently hollows out its victims and turns them into extremely fragile puppets. The movie is something of a satire about consumerism, with the world needing to be saved from a corrupt junk food empire.

The runaway success of The Stuff starts to cut into the profits of ice cream companies, so they hire David "Mo" Rutherford (Michael Moriarty) to do some industrial spying. He slowly uncovers that The Stuff's producers have a lot of secrets, and people have all moved to a single town to produce it. With the help of "Chocolate Chip Charlie" (played by Saturday Night Live veteran Garrett Morris), a former snack food mogul and martial artist, they discover the plot to export the parasitic monster to the world, and stop it with the help of a retired Colonel and his personal militia.

There's also an almost completely unrelated plot thread about a small kid who sees The Stuff moving and flat-out refuses to eat it, despite the increasingly creepy demands of his family that he do so. He flips out and destroys a grocery store trying to get rid of The Stuff, and for some reason the main cast comes and inducts him into the resistance after seeing a story about them in the news.

Are you troping it or is it troping you?