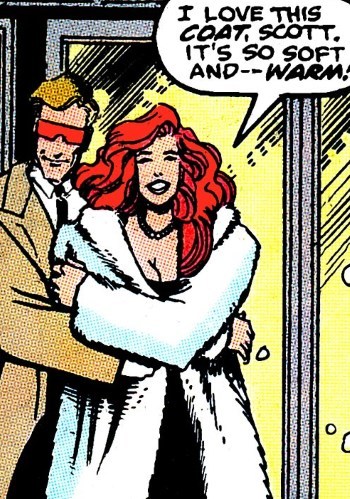 Jean Grey needed a new winter coat, so she and Scott decided to splurge for a fur.
"There is something so sensual about fur next to the skin, don't you think?"
— Delysia, Miss Pettigrew Lives for a Day
Advertisement:

In fiction, as in real life, many people wear fur garments just because it's luxurious and glamorous, whether worn for warmth or for style. If you see characters wear a stylish fur, it usually means they either have enough wealth to buy it (either on a whim or saving up for one), or they have found other ways to get one, because in many cultures these are status symbols.

Even when those not in the upper classes wear furs this way, it still indicates that the aggregate wealth of a society is higher than normal.

In Europe, certain furs were so prized that for a time there were Sumptuary Laws

about who could wear what kind of fur. Ermine was among the most prized, used to trim and line royal robes and capes (hence the reason the trope Ermine Cape Effect is named so). While the poor also wore furs, it was for utility instead of decoration, so their clothes were made with common pelts like sheepskin and rabbit, and weren't stylized and tailored.

So this trope is also as old in fiction, but visual media like film is where it's clearly evident. It was used extensively in The Golden Age of Hollywood just for the visual splendor it brought. At one point furs were so common they didn't provide characterization the way they do today as Stock Costume Traits. The exceptions were very specific outfits, like the classic pimp coat. What fur was worn was generally chosen one of two ways. The first was reflecting whatever Conspicuous Consumption style trends were popular for a certain demographic. The second was whatever the designer felt like.

Also, fur can be a dual purpose luxury. When worn in cold weather, it's a utility luxury (as in the picture), and when worn otherwise, it's a sybaritic luxury.

These days furs are less common in media and now has competition from Fur and Loathing, where a woman in a fur coat is either the Rich Bitch, The Vamp or downright evil, although some savvy costumers can do both if the character is wearing real fur (and expect some commentary on either trope). Other characters who wear fur tend to do it for a single episode or two.

Fashion Magazines, in at least one issue in (usually) an Autumn month, will have a spread about fur fashion. Any ads for furs would count as Up Marketing, as would ads for other luxury products that also feature models wearing fur.

Now since this is about use of fur to pretty up a scene, it's not just any instance of wearing fur. Even if a fur is worn for warmth, it also has to be an excuse to have a nice fur in the scene to count for this trope. Thus an Inuit parka usually doesn't count; it would have to be a designer parka (even if made in Inuit style).

A Sub-Trope of Garnishing the Story.

A Sister Trope to: Everything's Sparkly with Jewelry, Fluffy Fashion Feathers, Gold Makes Everything Shiny (all involve materials to show off wealth in a glamorous way), Pelts of the Barbarian (furs and hides that are rough instead of luxurious), Hell-Bent for Leather.

Compare An Ice Suit, Sexy Coat Flashing, Happy Holidays Dress, Sexy Santa Dress (all of which have many examples with fur).